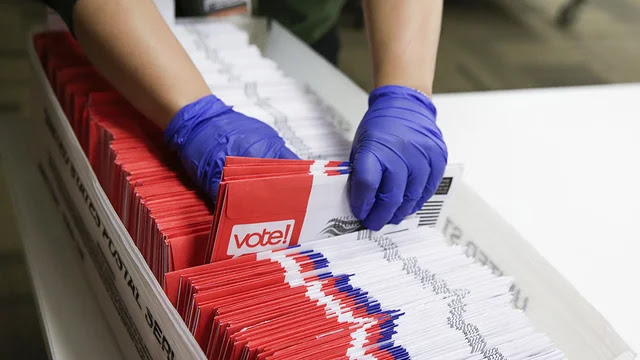 A three-judge panel of the 5th U.S. Circuit Court of Appeals on Thursday rejected the Texas Democratic Party’s efforts to expand mail-in voting in the state, siding with the state’s Republican leadership.
Texas Democrats were seeking to expand mail-in voting to all registered voters based on the argument that the state's age restrictions for such voting violate the 26th Amendment's protections against voting rules that discriminate based on age.
Texas law allows voters over age 65, as well as those with certain disabilities, who are ill, absent from their home counties or confined to jail, to vote by mail.
The panel ruled that "conferring a privilege" to some voters, such as the option of voting by mail to voters 65 and older, does not alone violate the 26th Amendment.
“A law that makes it easier for others to vote does not abridge any person’s right to vote,” the majority wrote.
U.S. Circuit Judge Carl Stewart wrote a dissenting opinion arguing that the law hurt younger voters by giving them less options to vote safely during a pandemic. In a separate case, the state’s Supreme Court ruled in May that the risk of contracting the coronavirus was not in itself a valid reason to allow mail-in ballots.
“The Texas Democratic Party will continue to fight in the district court for every Texan to have an equal right to vote, regardless of their age,” Texas Democratic Party Chairman Gilberto Hinojosa said in a statement.
Texas Attorney General Ken Paxton, who litigated the case for the state, said in a statement that his office “will continue to protect the integrity of Texas elections and uphold the rule of law.”
Texas