Analysis: Keep calm and vote on 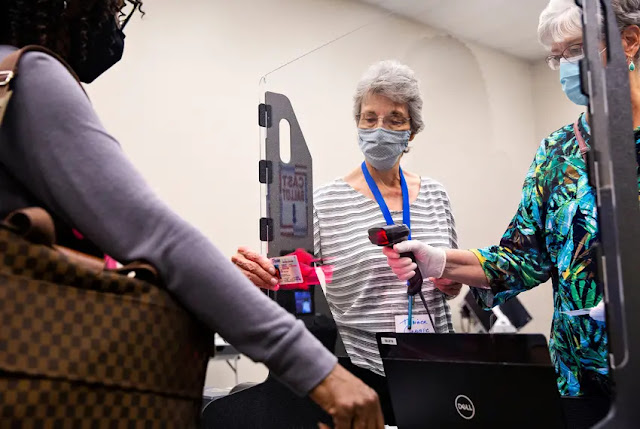 By Ross Ramsey
Confused about voting? Voting clerks in parts of Texas are confused, too. All the political chatter about problems with the U.S. Postal Service and voting by mail has some election officials telling their voters to cast absentee ballots by bringing them to the main office instead of dropping them in the mail. They’re also telling voters to bring approved voter identification if they vote that way — just as if they were voting in person — and not to bring anyone else’s ballot, sealed or not.
Anne Morris, a retired Milam County voter, said county officials told her to bring her absentee ballot to the county seat if she wanted to put it in their hands. And they told her that if she wanted to mail her absentee ballot, she should put it in a manila envelope so thieves wouldn’t recognize it and steal it from the mail before it reached the county offices. Milam County Clerk Jodi Morgan says her office is telling voters that dropping mail in a manila envelope is permissible if a voter doesn't want the Post Office to know it's a ballot, but they can also mail it in the envelope provided. And there's a special slot in the county's parking lot where voters can bring their absentee ballots in, with photo ID, if they want to skip the mail altogether.
Here’s an idea: Keep calm and vote on. Don’t let political figures talking about elections freak you out. Instead, ask why they want you to freak out and deal with that. Don’t confine your imagination to the worst crimes and hijinks that might take place in this election. They might not. And the worst thing that can happen is that voters are spooked out of picking the people who represent them; that’s a way to get a government that doesn’t reflect the population.
When political people — and a fair number of pundits, too — are trying to stir voters up, those voters have a choice between anxiety and serenity. And serenity doesn’t mean shutting it all out, plugging their ears and ignoring what’s going on. It’s more about what they do with the information they’re getting.
A lot of that talk is about fraud and corruption — relatively rare election crimes that seem, in this particular election season, to be the only things some politicians want to discuss.
Remember when electronic voting machines and hanging chads were all we were worried about? This year’s conversation makes that seem like the good old days.
President Donald Trump has been harping on the dangers of voting by mail, even though the country has a long history of such balloting and that it’s popular with older voters, including the president himself. Some of Trump’s Texas choristers have joined in. Lt. Gov. Dan Patrick said a few months ago that Democrats promoting absentee voting were trying to steal the election. Attorney General Ken Paxton landed a vote-harvesting indictment and arrests in Gregg County this week. The timing was interesting: The charges aren’t about the election that starts here, with early voting, in less than three weeks — they’re about an election two years ago.
Democrats have been unsuccessful in their attempts to allow more Texans to vote by mail, running into both political and legal opposition. The Texas Supreme Court ruled that worries about infection weren’t enough to qualify someone as disabled. But the court also noted that there is nothing on the absentee ballot application that requires someone to list their disability, and no authority at election offices to verify someone’s claim to that exemption for voting by mail. And federal courts tossed out a challenge to provisions that allow voters who are 65 years old or older to vote by mail while denying that privilege to younger voters.
Gov. Greg Abbott made one concession to fears of voting during a pandemic, extending early voting by six days. That spreads voting over a greater number of days and, by extension, increases a chance to vote in a socially distanced way. But this week, Abbott got sued over that extension.
All the talk and litigation works like a fog machine, making voting and elections seem a lot more complicated and confusing and full of traps for unwary voters than they are.
Voters have to calculate the value of their vote, as they listen to government officials and politicians talk about elections and voting the way they talk about other dishonest and unsavory activities.
Why would you want people to distrust an election you thought you might win? Stirring anxieties now betrays a lack of confidence. It sets the table for challenges of the results. It raises everyone’s distrust, too, no matter who wins on Nov. 3.
The real corruption is in the attacks on the system we’ve relied on for more than 200 years.
It’s not as confusing as it might seem. Hear the politicians out. Think about their motives. And get out and vote, with confidence, for the ones you like and against the ones you don’t. Easy.
This article originally appeared at the Texas Tribune.
Opinion