Analysis: In close elections, two opponents can be better than one 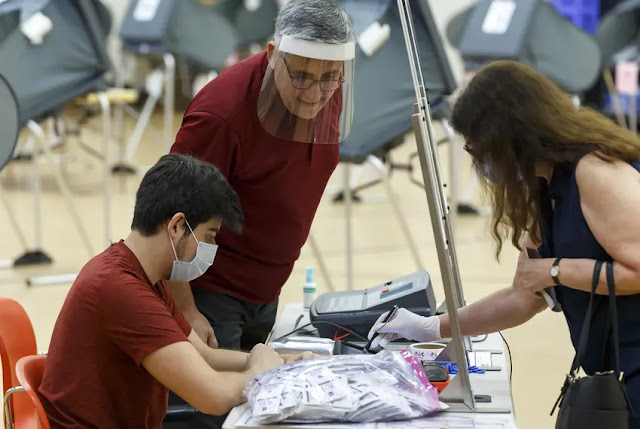 By Ross Ramsey
While many of us were relaxing over the long Labor Day weekend, the Texas Supreme Court issued a ruling that could decide some of the closest races on this year’s general election ballot.
The all-Republican court rejected a Republican effort to erase 44 Libertarian candidates from the ballot. The GOP candidates and organizations that sued to remove the Libertarians missed their deadline for taking people off the ballot, so the third-party folks will stay. Democrats, who filed their challenges on time, earlier got the courts to knock several Green Party candidates off the ballot.
The theory operating here is that Libertarian candidates siphon more votes from Republicans than from Democrats. A related bit of political folklore is that Green Party candidates take votes that would otherwise go to Democrats.
Sometimes, the minor-party candidate gets a share of the vote that is larger than the distance between the two leading candidates. In 2018, U.S. Rep. Will Hurd, R-Helotes, beat Democrat Gina Ortiz Jones by 926 votes, or by 0.44 of a percentage point. Ruben Corvalan, a Libertarian, got 4,425 votes, or 2.11%. The folklorists in politics would have you believe those votes would otherwise have gone to the Republican, but who’s to say for sure? Without Corvalan in the race, somebody would have broken 50% and put the might-have-beens to rest.
State Rep. Gina Calanni, a Democrat, beat a Republican incumbent by 113 votes in a 2018 race in which a Libertarian got 1,106 votes. Former state Rep. Mike Schofield, R-Houston, will probably never forget Daniel Arevalo’s name.
Neither the Libertarian Party nor the Green Party has ever won a statewide or legislative race in Texas. But third-party candidates sometimes get enough votes to keep winners below the 50% mark. That can still be enough in a general election; all the winner has to do is get more votes than everyone else — like Hurd did against Ortiz Jones.
Sometimes, a third-party candidate racks up a relatively large number, usually as a kind of protest against a major-party candidate. U.S. Rep. Joaquin Castro, D-San Antonio, easily won reelection in 2018, with 80.9% of the vote. The rest went to the only other candidate: Jeffrey Blunt, a Libertarian.
The Texas House elections in 2018 got attention because of the 12 seats Democrats took away from Republicans, but there were a number of close finishes in which a third candidate might have changed the outcome, making those races targets this year. For instance, state Rep. Jonathan Stickland, R-Bedford, won reelection by 1,428 votes; the Libertarian in his race got 1,644 votes. Stickland decided not to run for reelection this year.
Perhaps more interesting, especially in light of the weekend’s Texas Supreme Court decision, were the close House races where only two candidates were in competition in 2018. Adding a third candidate to the mix could mix things up in 2020. Some were Republicans, like Collin County’s Matt Shaheen and Jeff Leach, who won with 50.3% and 51.2%, respectively. Morgan Meyer, R-Dallas, got back to Austin with 50.1%; if 111 people had decided to vote for his opponent instead of him, Joanna Cattanach would have gone to Austin.
Dwayne Bohac won by 0.1 of a percentage point, in a race where a write-in candidate got 20 votes. A third party whose name actually was printed on the ballot would almost certainly have done better. Maybe that wouldn’t have changed the winner, but it would have changed the vote counts.
That’s just foreshadowing. This year, the Democrats are trying to win 9 more seats, and their first House majority in almost two decades. Republicans are trying to reverse four or five of their 2018 losses, because that many of the Democratic victors prevailed by very narrow margins.
Every year sees some close races. Candidates do everything they can to get an edge in those close races. And sometimes, the most effective way to do that is to have a third-party candidate in the race.
This article originally appeared at the Texas Tribune.
Opinion