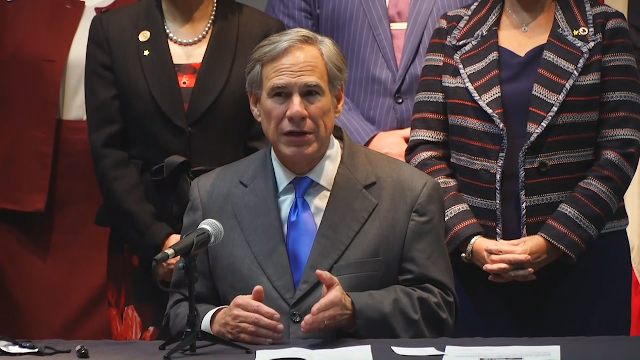 Texas Gov. Greg Abbott (R) on Thursday proposed a series of aggressive legislative proposals to significantly raise the penalties for crimes committed during protests, drawing criticism from civil liberties advocates.
Abbott’s proposals include making it a felony to cause property damage or injuring another person during an event legally deemed a riot. Shining lasers at police or blocking hospital entrances would also be deemed felonies, according to the Texas Tribune.
Under current state law, a riot is a gathering of at least seven people that creates danger to a person or property. Participating in one is currently a misdemeanor punishable by up to six months in jail.
The proposal would also make it a felony to “aid and abet riots with funds and organization assistance.” Another provision would delay the release of anyone arrested on suspicion of rioting until they have seen a court officer.
“We’re tired of seeing all these rioters do their rioting, they get arrested, they go in, and 30 minutes later, they’re back on the street,” Abbott said, according to the newspaper.
Activists condemned the proposal, saying it would give police overly broad latitude to define terms like “riot.”
“We wouldn’t want [police] to have this wide discretion to deem which protesters are taking part in disorderly conduct or unlawful protests,” David Villalobos of the Texas Organizing Project said Thursday. “This seems like a step that would really try to stifle the voice of the people, the people’s right to march and peacefully assemble.”
The majority of Texas protests since the May 25 death of George Floyd have been peaceful, although several others have given way to property damage. Dallas police have come under heavy criticism for firing pepper-ball launchers at peaceful demonstrators, and a federal judge later temporarily banned the city from using tear gas and similar weapons against peaceful protests.
The announcement came shortly after several similar proposals by Florida Gov. Ron DeSantis (R). In his proposals, DeSantis called for eliminating legal liability for drivers who cause injury or death while “fleeing for safety from a mob.” The proposal DeSantis released does not legally define a “mob.”
Texas