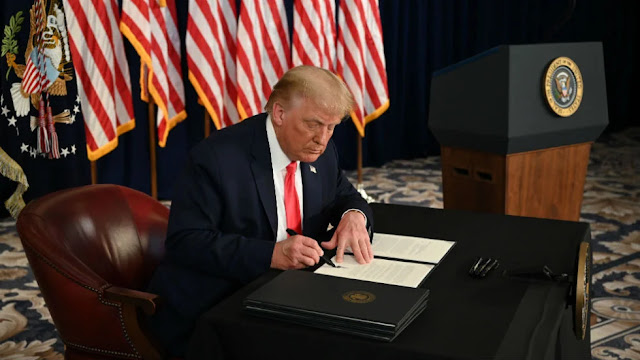 Top Democratic lawmakers on Sunday hit White House officials over both the legality and effectiveness of the executive orders signed by President Trump over the weekend while White House officials said the measures would help Americans affected by the coronavirus pandemic and hold up in court.

Both sides made their case on the Sunday morning political shows a day after Trump signed the four coronavirus relief orders before a crowd at his club in Bedminster, N.J. That came after negotiations between congressional Democratic leaders and White House officials reached an impasse.

Speaker Nancy Pelosi (D-Calif.) called the actions – which include an extension of unemployment benefits at a reduced rate, an eviction moratorium, a student loan repayment freeze and a suspension of the payroll tax –  “illusions.”

“What the president does doesn’t even accomplish anything he sets out to do in the categories he did, but we said to [Republicans], we’ll come down a trillion [dollars], you come up a trillion [dollars] and we’ll be able to have an agreement that meets the needs of the American people,” she said on “Fox News Sunday.”

Characterizing the actions “as even accomplishing what they set out to do, something that would take the place of an agreement, is just not so,” she added.

Democrats in particular hit the executive order on unemployment insurance for lowering Americans' benefits at a time of still-high unemployment and for putting responsibility for 25 percent of the enhanced benefit on states that are dealing with depleted revenues and antiquated systems.

Senate Minority Leader Chuck Schumer (D-N.Y.), who along with Pelosi had been attempting to negotiate a deal on legislation, called it an "an unworkable plan."

"It doesn't do the job,” he said on ABC’s “This Week” Sunday of all four orders. “It's not going to go into effect in most places for weeks or months because it's so put together in a crazy way."

"If he just would have renewed the $600 as we do in the HEROES bill through January, things would flow smoothly,” he added, referencing the package passed by the House earlier this year.

“This country-club fix suggested by the president is going to be a cut in the unemployment benefits for 30 million Americans,” Durbin said on NBC’s “Meet the Press.”

The action reduces the federal plus-up from $600 to $400, with state governments responsible for 25 percent.

Treasury Secretary Steven Mnuchin defended the reduced amount, noting that the White House had offered to continue the $600 payments for a week while negotiations continued.

“We thought $400 was a fair compromise. We offered to continue to pay $600 while we negotiate, and the Democrats turned that down,” he said.

Meanwhile on CNN’s “State of the Union,” White House economic adviser Larry Kudlow sparred with CNN’s Dana Bash over both the capacity of states to cover the $100 and how much unemployed people would receive, with Kudlow touting a total of $800.

“But the executive action says 400 dollars and the state would pay 25 percent of this,” Bash replied. “You’re talking about some other money that I don’t know about.”

When Kudlow claimed “we will stand ready to repurpose if states put in a little bit more,” Bash said “We need a bit of a reality check here. You do agree that the only way any of this could possibly happen is if the states actually ask for it and create a whole new system?”

"Our counsel's office, the Treasury Department believes it has the authority to temporarily suspend tax collections. So we're banking on that,” Kudlow said on ABC’s “This Week,” saying they would likely end up in court but adding that the White House is "going to go ahead with our actions anyway."

White House trade adviser Peter Navarro said on NBC's "Meet the Press" he was "confident" the orders would stand up in court.

Mnuchin, meanwhile, suggested Democrats would face a losing PR battle if they took the administration to court over the orders.

“We’ve cleared with the Office of Legal Counsel all these actions,” Mnuchin said on “Fox News Sunday.” “If the Democrats want to challenge us in court and hold up unemployment benefits to those hardworking Americans that are out of a job because of COVID, they’re going to have a lot of explaining to do.”

Schumer, meanwhile, declined to comment on the legality or constitutionality of the orders, while Durbin said going to court over them was a “moral dilemma.”

“This is a moral dilemma, we want unemployed people to receive benefits, we never wanted them cut off at all, I’m not going to suggest we run out to court at this point,” Durbin said on “Meet the Press.”