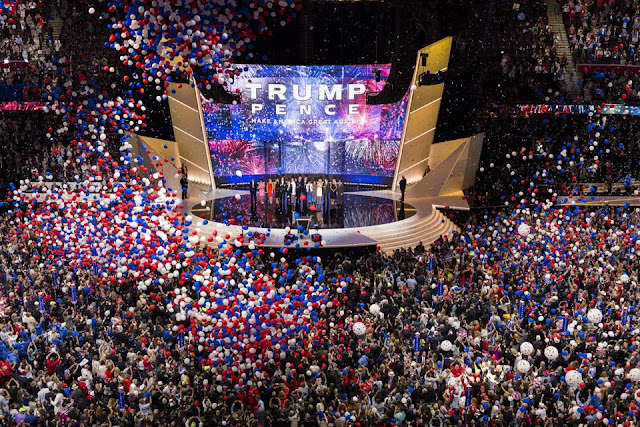 Are this year’s political conventions still even “conventions,” with no delegates in attendance, no gathering of a crowd in an arena, no balloon drop or any of the other traditional associated pomp and hoopla?

Joe Biden won’t even be traveling to appear before Democrats. Republicans are currently planning for “a ‘central hub’ in another metro area that officials so far have declined to make public.”

Politico reveals that the Democratic “convention” — which is just ten days away — will feature John Kasich, Bernie Sanders, Elizabeth Warren, Kamala Harris, both Obamas and of course, both Bidens. Bill Clinton will appear, in what some will interpret as a downplaying of his #MeToo issues. Hillary Clinton is scheduled to speak; I wonder if the president will notice, and perhaps share an observation or two about her via Twitter.

But without a crowd, are the convention nights going to feel like an endless series of responses to the State of the Union?

If you’re a member of the party, an elected official in the party, a reporter covering national politics, or an activist, the conventions are basically Disneyland. It’s the one time every four years that just about every major figure in a political party is in one place at the same time.

Political history gets made at conventions — think of “Read my lips, no new taxes,” Pat Buchanan’s “cultural war” speech in 1992, Barack Obama’s star-making speech in Boston in 2004, Sarah Palin’s debut in 2008.

This year may be so different that we won’t get anything like those moments. And so if the lone remaining purpose of the convention is the decent audience that comes from appearing on all networks in prime time in late summer . . . is a prime-time speaking slot as valuable as it used to be?