US troop presence in Afghanistan will be 'less than 5,000' by November 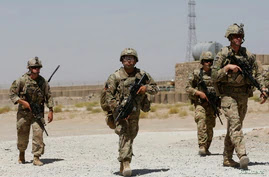 Defense Secretary Mark Esper said in an interview broadcast late Saturday that no more than 5,000 U.S. troops would remain in Afghanistan by the end of November as the Trump administration looks to move forward with a reduction of forces in the region.

"We’re going down to a number less than 5,000 by the end of November. We need to brief Congress [about] what that looks like," Esper said on Fox News's "Justice with Judge Jeanine."

Esper cautioned that the troop reduction would be "conditions-based" and carried out as long as the Pentagon felt it could proceed with missions in the region with fewer troops.

"Right now, we think that we can do all the core missions, first and foremost being ensured the United States is not threatened by terrorists coming out of Afghanistan," he said. "We can do those at a lower level."

"In the meantime, we see the Afghan peace process — it's not perfect, but it’s moving forward, slowly," he added. "You know, it’s a windy road. It’s a rough road."

The Trump administration and the Taliban earlier this year signed a historic deal with the ultimate goal of ending the U.S. presence in Afghanistan. The deal called for the U.S. to withdraw troops in the region in exchange for a commitment from the Taliban that it will not engage in terrorism against the U.S.

The U.S. is expected to withdraw completely from Afghanistan according to the deal, which also includes intra-Afghan negotiations and commitments on counterterrorism. But those negotiations have faced setbacks due to continued attacks by the Taliban. The Pentagon has also said that the Taliban has yet to break its ties with al Qaeda.

In July, the Pentagon announced that the U.S. had withdrawn from five military bases in the country and that its troop level remained in "the mid-8,000s."

Trump said in an interview with Axios last week that he expected that figure to be below 5,000 by the 2020 presidential election, though he did not offer any specific timeline.