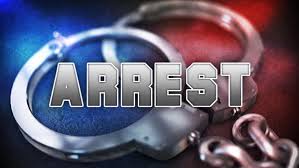 Late Thursday night, Amarillo police officers were flagged down in reference to auto burglary suspects in a Dodge minivan at the Cefco at I-40 & Bell St.

The vehicle then drove back toward the highway to escape before another citizen pinned his vehicle against hers preventing the escape.

Morris fled on foot but was caught and still fought arresting officers. Morris was accompanied by 23 year old Nathan Ramirez of Amarillo and a 15 year old juvenile male.