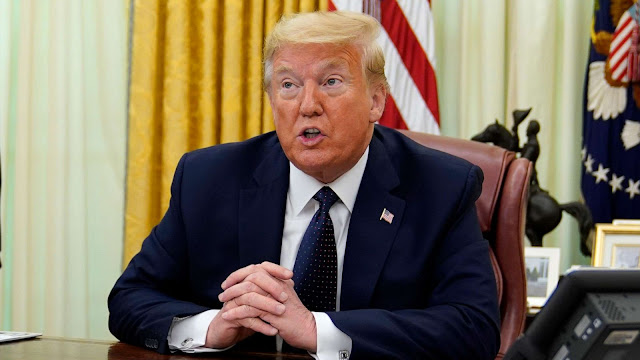 Top administration officials said Friday they will recommend President Trump move forward with executive orders to address the economic fallout from the coronavirus as negotiations on Capitol Hill collapsed.

"In the meantime, we're going to take executive orders, to try to alleviate some of the pain that people are experiencing," White House chief of staff Mark Meadows told reporters.

Treasury Secretary Steven Mnuchin said that he and Meadows "will recommend to the president based upon our lack of activity today to move forward with some executive orders."

"Again we agree with the Speaker, this is not the first choice," he added.

Mnuchin said administration officials will be recommending executive orders to deal with unemployment after the $600 per week federal benefit expired last week. They will also recommend that Trump sign orders relating to rental foreclosures and student loans.

"It's going to take a little bit of time for us to finalize these and process them but we'll do them as quickly as we can because the president wants action," Mnuchin said.

The executive orders could be signed as soon as the weekend, the GOP negotiators said.

They did not specifically mention trying to use an executive order to enact a payroll tax cut, something Trump has floated in recent days. White House economic advisor Larry Kudlow said earlier Friday that an executive order suspending the payroll tax was nearly completed and that he thinks Trump will sign it.

Mnuchin and Meadows met for less than two hours on Friday with House Speaker Nancy Pelosi (D-Calif.) and Senate Minority Leader Charles Schumer (D-N.Y.) as part of a Hail Mary effort to revive the negotiations on a fifth coronavirus bill, which already appeared to be on life support nearly two weeks of no progress.

But they made no progress during the meeting, with both sides trading blame for who was at fault for the holdup.

There are no plans to meet again over the weekend, according to Mnuchin and Meadows.

The stalemate guarantees that the negotiators will blow past a self-imposed Friday deadline for getting an agreement in principle, with chances of a quick deal on another coronavirus relief package appearing all-but dead.

“Unfortunately, we did not make any progress today and we discussed the same issues,” Mnuchin said.

Schumer and Pelosi said they doubled down on their offer to reduce their $3.4 trillion price tag in exchange for Republicans agreeing to raise their figure by $1 trillion, but were rebuffed.

“They rejected it. They said they couldn’t go much above their existing $1 trillion,” Schumer said, calling it a “disappointing meeting.”

Democrats argued that the GOP negotiators faced a chance: Continue the talks on a fifth package or use the executive orders, which they warned will be challenged in court. For now, the administration appears ready to take the second path.

"Don't say it's your way or no way, and if we do that we can accomplish a whole lot of things," Schumer said. "The other choice is for them to do executive orders, which by their own admission, they said it to us repeatedly, is not close to as good."