Trump seeks to distance himself from Bannon 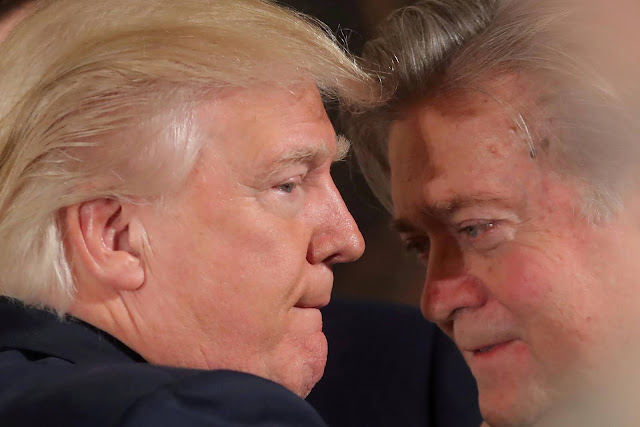 President Trump sought to distance himself from Stephen Bannon on Thursday following the former White House chief strategist's arrest, with Trump saying he hasn’t dealt with Bannon in a long time and calling a fundraising project for which Bannon and three others were indicted “inappropriate.”

“I feel very badly. I haven't been dealing with him for a very long period of time,” Trump told reporters in the Oval Office, adding that Bannon only served for a small period of time in the administration after working on his 2016 campaign as CEO.

Trump said that he has no knowledge about the “We Build The Wall” fundraising campaign that Bannon was involved in but said that he disagreed with the project.

Bannon and three others were charged with fraud by federal protectors in New York in connection with their work for the project.

“I don't like that project. I thought it was being done for showboating reasons,” Trump said Thursday, noting he disagreed with the purported effort to raise private funds to pay for the wall at the southern border with Mexico.

“It was something that I very much felt was inappropriate to be doing,” Trump said when asked about the developments during a meeting with Iraq's prime minister, just hours after the charges were revealed.

Bannon served as chief operating officer of Trump’s 2016 campaign and went onto work as chief strategist in the White House. He was ousted by Trump in August 2017, less than eight months into the president’s term.

Bannon found himself under criticism from Trump and other Republicans as a result of comments he made about the president's eldest son, Donald Trump Jr., for Michael Wolff’s book “Fire and Fury.”

On Thursday morning, the U.S. attorney’s office in the Southern District of New York announced that Bannon, Brian Kolfage, Andrew Badolato and Timothy Shea had been arrested and charged with allegedly defrauding hundreds of thousands of donors of the online crowdfunding campaign called “We Build The Wall” that netted more than $25 million.

Bannon is among a handful of members of Trump’s inner circle who have faced federal charges and is the second high-level White House official to be charged with a crime after former national security adviser Michael Flynn.
National