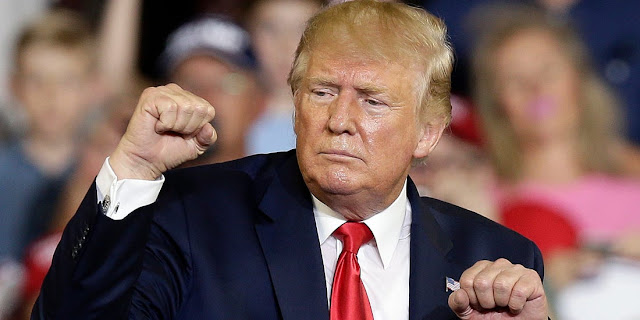 President Trump and Vice President Pence hit the campaign trail on Friday in a trio of states that will be key to the outcome of November's election.

Trump rallied supporters in New Hampshire on Friday evening while Pence addressed supporters earlier in the afternoon in Minnesota and Michigan.

The events sought to seize on momentum built up throughout the week at the Republican National Convention and previewed what is expected to be a loaded travel schedule for both men in the final two months of the campaign.

The president was energized by the crowd as he took the stage in Londonberry, N.H., and his remarks — delivered in an airport hanger in front of a parked presidential aircraft — were more free-flowing than his scripted convention speech delivered at the White House the night before.

Trump seized on viral footage of protesters near the White House who gathered around Sen. Rand Paul (R-Ky.) as police escorted him away from the president's speech on Thursday night.

“You know what I say? Protesters your ass," Trump said to cheers at his rally. "I don’t talk about my ass. They’re not protesters, those aren't protesters. Those are anarchists, they’re agitators, they’re rioters, they’re looters."

Supporters in the Granite State were given signs that read "This is a Peaceful Protest," a swipe at criticism of holding a large political gathering amid the coronavirus pandemic while widespread protests against racial injustice have continued.

The president's remarks were otherwise reminiscent of his other rallies, filled with baseless claims of mass voter fraud, calls for law and order in the face of protests in cities and attacks on Democratic presidential nominee Joe Biden's mental sharpness.

"I believe I have the honor of running against the worst candidate ever put up by the Democratic candidate," Trump said.

The rally took place amid a series of major national events, including growing unrest in Kenosha, Wis., over the police shooting of Jacob Blake; major destruction in southern states reeling from Hurricane Laura; and as the coronavirus pandemic continues to infect and kill hundreds of Americans each day.

The Biden campaign issued separate statements criticizing Trump and Pence for their visits to all three states on Friday, highlighting the dire health and economic affects the pandemic has had in each location.

"Granite State families deserve a president who will heal and unite our nation, and make sure New Hampshire communities recover from this crisis stronger than they were before," Biden said in a statement specifically addressing Trump's New Hampshire visit. "As President, I will restore the decency and leadership to the White House that has been eroded under the current administration and provide all Granite Staters the dignity and respect that they deserve."

The states Trump and Pence traveled to Friday are of vital significance to the Trump campaign as it faces limited options to expand the electoral map from 2016 and finds itself on defense in a number of states the president carried four years ago.

Campaign officials have identified New Hampshire and Minnesota as flip opportunities after Trump narrowly lost both in 2016. By contrast, Trump won Michigan four years ago by roughly 11,000 votes, and a CNBC poll from last week shows him trailing Biden in the state by 6 percentage points.

The coronavirus pandemic knocked Trump off the trail for a few months as states restricted large gatherings. The president attempted to make a triumphant return with a June rally in Tulsa, Okla., but it backfired as attendance was underwhelming and local health officials blamed the event for a subsequent rise in COVID-19 cases in the area.

After resorting to "tele-rallies" over Facebook for a few weeks, Trump appears to be shifting back into in-person events, even as the virus continues to kill roughly 1,000 Americans each day.

He rallied hundreds of supporters in Minnesota, Wisconsin, Arizona and Pennsylvania last week, and hundreds more gathered to see him in New Hampshire.

Each recent rally has taken place outdoors on tarmacs or at airplane hangars, which were at least partially open. Data shows the virus is less likely to spread outdoors, though many of the attendees still do not wear face coverings and are not socially distanced.

Campaign advisers believe Trump must get back to something akin to the rigorous travel schedule he maintained in 2016 and ahead of the 2018 midterms to rev up enthusiasm among his base and drive the narrative around the election.

Trump campaign manager Bill Stepien told Politico in an interview this week that Trump would do "a lot" of in-person campaigning during the final stretch of the race. He pointed to the president's travel during the week of the Democratic National Convention, when he visited four states in as many days.

"He traveled more in one week last week than Joe Biden has traveled since March," Stepien said.

"We are aggressive," he added. That's the campaign we run. That's the kind of campaign you will keep seeing us run."

Trump is expected to resume holding multiple campaign events per week heading into the final two months before the election.

Pence has already been on the road regularly for the last two months, meeting with governors about the pandemic and speaking to targeted coalition groups like "Cops for Trump" and "Latter-Day Saints for Trump." The vice president will be in Pennsylvania and North Carolina next week, and is expected to keep a busy travel schedule for the remainder of the campaign cycle.

The Trump campaign has frequently drawn a contrast between the president's willingness to travel despite the virus and Biden's tendency to remain cloistered in his Delaware home, save for rare public appearances.

But the former vice president said Thursday he will resume campaign travel after Labor Day with planned stops in Arizona, Minnesota, Pennsylvania and Wisconsin.