Trump responds to Michelle Obama over address at Democratic convention 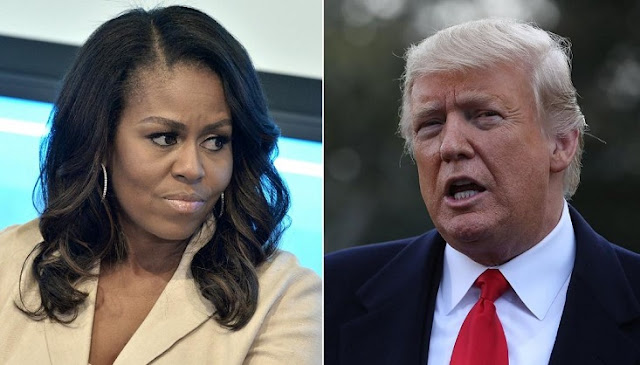 President Trump early Tuesday lashed out at Michelle Obama after the former first lady issued a blistering criticism of the incumbent president during remarks at the virtual Democratic convention.

“Somebody please explain to @MichelleObama that Donald J. Trump would not be here, in the beautiful White House, if it weren’t for the job done by your husband, Barack Obama,” Trump tweeted early Tuesday morning.

Trump, who did not criticize Michelle Obama directly, went on to call presumptive Democratic presidential nominee Joe Biden an “afterthought” and accused former President Barack Obama of offering a “very late & unenthusiastic endorsement” of his former vice president. Barack Obama endorsed Biden, who served as his vice president for eight years, after it was clear that Biden was the Democratic Party's presumptive nominee.

“My Administration and I built the greatest economy in history, of any country, turned it off, saved millions of lives, and now am building an even greater economy than it was before. Jobs are flowing, NASDAQ is already at a record high, the rest to follow,” Trump continued, defending his administration’s response to the novel coronavirus, which has now killed more than 170,000 Americans and devastated the U.S. economy.

The president went on to claim that the Obama administration's response to the 2009 H1N1 pandemic was viewed as "weak and pathetic." He also asserted that the previous administration was “the most corrupt in history,” again flinging the baseless accusation that Barack Obama and Biden committed “treason” by “spying” on his 2016 campaign in the course of the Russia investigation.

“Thanks for your very kind words Michelle!” Trump added, mockingly.

In a pre-taped address that aired at the virtual convention Monday evening, Michelle Obama launched a direct rebuke of Trump’s character and record as she urged voters to cast ballots for Biden in the upcoming November election. She described Trump as the "wrong president" for the United States and warned of more difficult times if he is reelected.

“Let me be as honest and clear as I possibly can. Donald Trump is the wrong president for our country. He has had more than enough time to prove that he can do the job, but he is clearly in over his head. He cannot meet this moment. He simply cannot be who we need him to be for us. It is what it is,” the former first lady said.

“if you take one thing from my words tonight, it is this: if you think things cannot possibly get worse, trust me, they can; and they will if we don't make a change in this election. If we have any hope of ending this chaos, we have got to vote for Joe Biden like our lives depend on it,” she continued.

Trump also lambasted Kasich ahead of his remarks, calling him a “major loser” in remarks to reporters while flying back to Washington, D.C., from a trip to Minnesota and Wisconsin.