Trump pulled from briefing after shooting outside White House 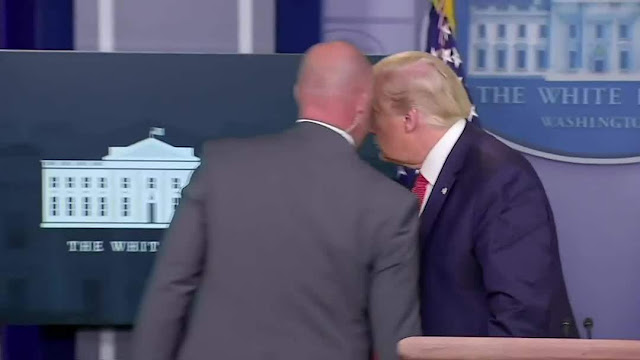 President Trump on Monday was abruptly pulled from a press briefing after a shooting outside the White House.

Trump departed after a Secret Service agent appeared to speak to him at the podium. Another agent outside the room locked the doors.

The president returned to the podium roughly 10 minutes later. He said there had been a shooting outside the White House involving law enforcement. The suspect was armed, Trump said, but he had few additional details.

"I do want to thank Secret Service," Trump said. "They are fantastic."

Trump said he was not taken to the protective bunker for the incident.

"They just wanted me to step aside just to make sure everything was cleared outside," he said.

A chaotic scene unfolded in the moments after Trump was pulled from the briefing. Armed Secret Service officers were seen stationed on the North Lawn of the White House as reporters inside the building scrambled to learn the cause of the lockdown.

After fielding several questions about the incident outside the White House, Trump returned to his scripted remarks on the nation's economic response to the coronavirus pandemic.

"As I was telling you," Trump said, launching into positive figures about the Dow Jones.