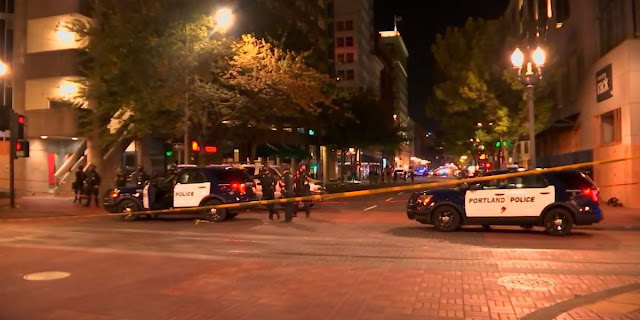 President Trump ramped up his attacks against Portland Mayor Ted Wheeler (D) on Sunday after a person was killed in the Oregon city following skirmishes between supporters of the president and Black Lives Matter demonstrators.

Trump did not address the incident; however, he posted multiple tweets claiming that tensions in the city demanded federal intervention. In response to a tweet documenting clashes between Trump supporters and counterprotesters, the president claimed they were the result of incompetence from the mayor.

"The big backlash going on in Portland cannot be unexpected after 95 days of watching and incompetent Mayor admit that he has no idea what he is doing," Trump said. "The people of Portland won’t put up with no safety any longer.The Mayor is a FOOL. Bring in the National Guard!"

He added in a separate tweet that Wheeler was "incompetent, much like Sleepy Joe Biden," referencing the Democratic presidential nominee.

"Our great National Guard could solve these problems in less than 1 hour," he said. "Local authorities must ask before it is too late. People of Portland, and other Democrat run cities, are disgusted with Schumer, Pelosi, and thier local 'leaders.' They want Law & Order!"

Portland has been the site of daily protests since the May 25 police killing of George Floyd in Minneapolis. Tensions in the Oregon city escalated last month after the Trump administration deployed federal troops as part of the president's efforts to protect federal property, leading to violent clashes between officers and protesters.

The police shooting of Jacob Blake in Kenosha, Wis., ignited a fresh wave of demonstrations in cities across the nation. In Portland, protests persisted, although they have reportedly numbered only a few hundred people in recent days.

A group of protesters on Friday held demonstrations outside the mayor's residence and in front of the city's police union building to demand more action in response to police violence.

Late Saturday, a man was shot and killed following a day in which a caravan of Trump supporters entered Portland and clashed with protesters, police said. The man who was fatally shot was wearing a hat with "Patriot Prayer" across the front, according to multiple reports. Patriot Prayer is a far-right group that has clashed with protesters before.

It remains unclear if the shooting was linked to the skirmishes, which happened throughout the day, according to police. Police said they made 10 arrests on Saturday.

"If anyone can provide information about this case, I ask them to please reach out to our detectives," Police Chief Chuck Lovell said in a statement. "This violence is completely unacceptable and we are working diligently to find and apprehend the individual or individuals responsible."

Trump has regularly painted the unrest and violence in some U.S. cities this summer as the result of Democratic leadership. He has repeatedly pledged "law and order" to respond to the current environment.

Wheeler last month decried the federal presence of officers in his city. After being tear-gassed outside a federal courthouse while joining protesters one night, he said that "flat-out urban warfare" was being waged against "the people of this country by the president of the United States."

In an open letter to the president Friday, Wheeler urged Trump to keep federal troops away from the city, noting that Portland could handle responding to the looting, arson and vandalism that has taken place.
"We don’t need your politics of division and demagoguery," he said. "Portlanders are onto you. We have already seen your reckless disregard for human life in your bumbling response to the COVID pandemic. And we know you’ve reached the conclusion that images of violence or vandalism are your only ticket to reelection."

The Trump administration began withdrawing federal tactical teams from Portland in July after an agreement was made with Gov. Kate Brown (D). But Trump has continued to demand local authorities call in the National Guard throughout August, claiming they would have broader authority than the troops who were sent to protect a federal courthouse.