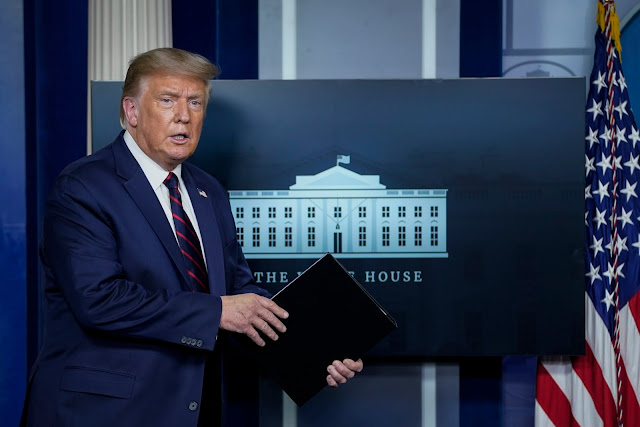 President Trump said early Wednesday that he is considering delivering his GOP nomination acceptance speech from the White House later this month.
“We’re thinking about it. It would be the easiest from the standpoint of security,” Trump said on “Fox & Friends” when asked about reports that GOP convention planners were considering the White House South Lawn as an option. “We’re thinking about doing it from the White House because there’s no movement.”
“It's easy, and I think it's a beautiful setting and we are thinking about that. It's certainly one of the alternatives,” the president added.
Trump went on to say he would “probably” deliver the speech live from the White House but said the choice was not final and that he would change it if “somebody had difficulty with it.” Trump said that delivering the speech from the White House would also be the least expensive for U.S. taxpayers.
The president’s remarks, which came during a phone interview on the program, follow a Washington Post report late Tuesday that Republican National Convention planners are considering the South Lawn as the venue for the president’s televised acceptance speech among other locations, including Trump International Hotel in Washington, D.C.
Trump was initially slated to deliver his acceptance speech in Jacksonville, Fla., but the president abruptly canceled the Florida convention festivities late last month, citing the rising coronavirus cases in the state. Trump is expected to attend the GOP convention business in Charlotte, N.C., but has been coy about details regarding where he plans to deliver his official acceptance speech.
Trump has increasingly used the White House as a venue to deliver politically charged remarks as the coronavirus pandemic has compromised his ability to hold his signature large-scale campaign rallies, and a decision to hold his acceptance speech on the South Lawn would be the latest and most high-profile example of that.
The president’s use of the White House for overtly political events has broken with decades of practice by past presidents, who have sought to avoid campaign business on the White House grounds. The Hatch Act prohibits federal officials, including White House staffers, from engaging in partisan political activities, but the president and vice president are exempted from the law.
Speaking to reporters on Capitol Hill later Wednesday, Sen. John Thune (R-S.D.) questioned the legality of such a move, suggesting there could be potential Hatch Act violations associated with staging the event on the grounds of the White House.
“I assume that’s not something that you could do. I assume there’s some Hatch Act issues or something,” Thune said. “I don’t know the answer to that and I haven’t heard him say that but I think anything to do with federal property would seem to me to be problematic.”
National