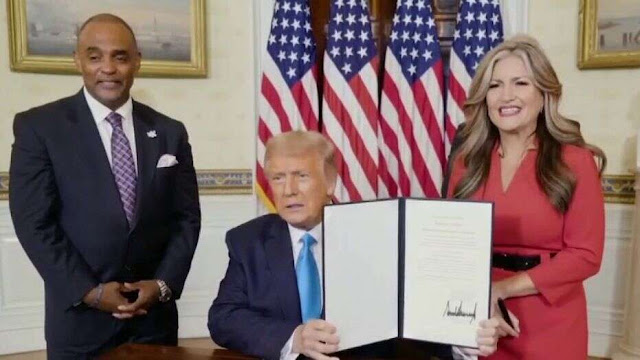 President Trump broke with precedent on the second night of the Republican National Convention, granting a pardon and participating in a naturalization ceremony at the White House in videos that aired Tuesday during the primetime event.

Speeches from Secretary of State Mike Pompeo and first lady Melania Trump also pushed the boundaries of rules surrounding the mix of politics and governance.

Several portions of the convention used the White House as a backdrop for Trump to put his presidential powers on full display in an election year that has him trailing Democratic nominee Joe Biden as he fights for a second term.

The events Tuesday offered up powerful images and striking visuals for Trump to leverage in his campaign against Biden, who is leading the incumbent president in national and key battleground state polls.

William Howell, a political scientist and professor at the University of Chicago Harris School of Public Policy, said the choice of venue was part of a larger phenomenon of Trump and his administration pushing back against a host of democratic norms and blurring the lines between governing and partisan maneuvering.

“All presidents in various ways challenge it. It’s hard to maintain. I think that distinction has really been smudged under this administration,” said Howell.

The second night of the convention featured Pompeo delivering a speech supporting Trump’s reelection campaign in an address given from Jerusalem on an official State Department trip. Secretaries of State and Defense normally refrain from delivering political addresses at party conventions.

Pompeo’s speech has been shrouded in controversy for days, and earlier Tuesday a Democratic lawmaker on the House Foreign Affairs Committee announced an investigation into the speech, raising concerns about potential Hatch Act and State Department regulation violations by the secretary.

Speaking against the backdrop of the “Old City,” Pompeo touted the president’s hawkish lines against China and North Korea and in the Middle East.

Pompeo said his family is “more safe, and their freedoms more secure, because President Trump has put his America First vision into action.”

“It may not have made him popular in every foreign capital, but it has worked,” Pompeo added.

To conclude the evening’s programming, Melania Trump delivered a rare public address from the White House Rose Garden, expressing sympathies to those impacted by COVID-19, touting the administration’s work, and casting her husband as a champion of American families as part of an effort to help boost his reelection prospects.

Trump’s use of federal grounds for partisan political activity during an already unusual convention -- pushed largely online due to the coronavirus pandemic -- triggered criticism in the preceding days. On Thursday, Trump will become the first sitting president to deliver an acceptance speech from the White House.

Walter Shaub, former director of the U.S. Office of Government Ethics, accused Trump and his staff of “abus[ing] the people's government by using the White House to host a party's nominating convention” and destroying ethical norms.

“This breach of norms will send a message to the world that the U.S. is not serious about government ethics, to the federal workforce that their leaders are free to use the government to influence elections, and to the people that the chief public servant is now public-served,” Shaub tweeted Tuesday.

Trump’s allies are hoping the White House venue will serve Trump well as he looks to give his campaign some much-needed momentum. They also doubt that voters will devote attention to any controversy resulting from Trump’s use of the White House for the convention.

“Voters are focused on Trump’s response to the [coronavirus], specifically the economy and their communities,” Dan Eberhart, a prominent GOP fundraiser, told The Hill last week. “Voters are not going to devote bandwidth to whether Trump’s decision to use the White House for his acceptance speech is an ethics violation. Voters have more pressing issues on which to base their vote.”

In one recorded moment from the White House, Trump participated in a naturalization ceremony with five individuals and Acting Department of Homeland Security Chad Wolf. In his speech, Trump praised the new citizens for coming to the U.S. through legal channels.

“You followed the rules, you embraced our laws, you learned your history and embraced our values and proved to be men and women of the highest integrity,” Trump said. “It’s not so easy, you went through a lot…you’ve earned the most prized, cherished and treasured possession anywhere. It’s called American citizenship. There’s no higher honor and no greater privilege.”

The Democratic National Committee blasted the event, releasing a statement saying that “Trump doesn’t care about immigrants unless he’s using them as props.”

Trump’s pardon of Jon Ponder, a convicted felon who left prison and launched a program aimed at helping former inmates reintegrate into society, was the centerpiece of the early minutes of the second night of the convention.

Trump has touted criminal justice reform as one of his greatest bipartisan accomplishments and as an example of how he’s improved the lives of some Black Americans.

Ponder and Richard Beasley, a retired FBI agent who arrested Ponder for bank robbery, spoke in pre-recorded segments at the beginning of the night about Trump’s commitment to criminal justice reform and the empathy he has shown to former inmates.

Trump, Ponder and Beasley then gave speeches in a pretaped video from the White House grounds, before Trump signed Ponder’s pardon.

“I will continue to give all Americans, including former inmates, the best chance to build a new life and achieve their own American dream,” Trump said.

CNN commentator Van Jones, who runs the REFORM Alliance and worked with the White House on its criminal justice reform efforts, said he loved seeing Ponder pardoned but that he was “torn” by the spectacle of it.

"I love that he did it,” Jones said. “I don't like where he did it and the way he did it. So I feel torn.”
National