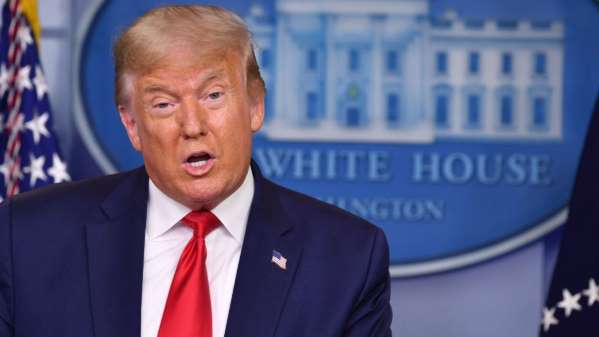 President Trump announced Wednesday evening that his administration would notify the United Nations of plans to restore "virtually" all sanctions on Iran.

“Today, I am directing the Secretary of State Mike Pompeo to notify the U.N. Security Council that the United States intends to restore virtually all of the previously suspended United Nations sanctions on Iran,” Trump said during remarks at a press briefing. “It’s a snapback, not uncommon.”

The move comes after the U.N. Security Council rejected an effort by the United States to extend a weapons embargo on Iran last Friday. Trump told reporters Saturday that snapback sanctions could come as soon as this week.

Shortly after Trump’s remarks, the State Department said that Pompeo would travel to the U.N. in New York City between Aug. 20 and 21 to notify the body that the United States would begin the process of restoring sanctions on Iran.

“Thirty days after Secretary Pompeo’s notification, a range of U.N. sanctions will be restored, including the requirement that Iran suspend all enrichment-related activities. This will also extend the 13-year arms embargo on Iran,” State Department spokeswoman Morgan Ortagus said, calling the decision to not extend the arms embargo an “inexcusable failure.”

Trump withdrew the U.S. from the Iran nuclear agreement brokered during the Obama administration, formally known as the Joint Comprehensive Plan of Action (JCPOA), in May 2018. The move proved controversial and put the U.S. at odds with some of its closest allies.

But the administration argues that despite leaving the deal it remains a party to the resolution that enshrined the JCPOA, the U.N. Security Council Resolution 2231, and retains the right to snap back sanctions if it believes Iran is violating the terms of the agreement.

Trump on Wednesday derided the agreement as “disastrous,” blaming the previous administration for what he described as a “foreign policy failure.”

Yet a snapback of U.N. sanctions is unlikely to garner support from the majority of Security Council nations amid overwhelming opposition to the U.S.’s resolution to extend the arms embargo.

Only the Dominican Republic voted with the U.S. on extending the embargo, while 11 nations abstained and two voted no.

Despite a lack of support among U.N. Security Council member states, Pompeo said on Wednesday he expects the snapback portion of Resolution 2231 to be “fully enforced.”

Supporters of the nuclear deal fear that the Trump administration’s push for a snapback on sanctions will completely dismantle the remaining elements of the JCPOA.
World