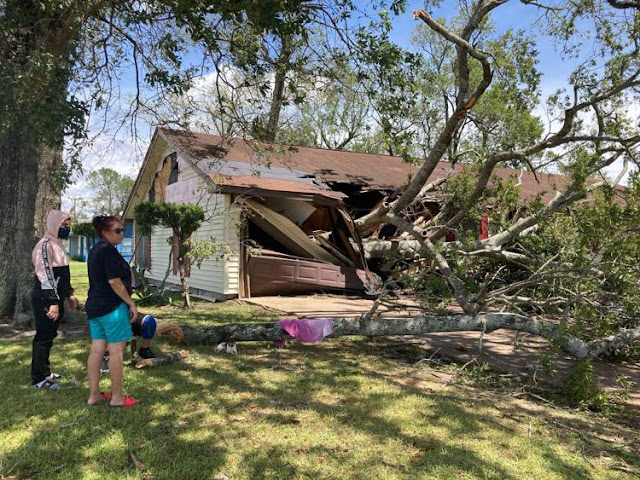 Gov. Greg Abbott and other state and local officials said “Texas dodged a bullet” at a news conference Thursday in Orange.

After surveying damage in Southeast Texas from a helicopter, Abbott said the eastern Texas town of Orange appeared to receive the brunt of the damage.

Orange is located about 35 miles west of Cameron Parish, La., where the Category 4 storm made landfall in the early hours of Wednesday morning. Officials were anticipating the city to experience a 10-foot storm surge but received a 3-foot surge instead.

"I asked everybody how they feel about working their way through this hurricane, [and] everybody pretty much had the same phrase," Orange Mayor Larry Spears said. "That is, 'We dodged a bullet. It could've been far worse.'"

From the air, Abbott said he saw roofs ripped off of buildings, shingles missing, trees down and flooded streets. Roughly 160,000 Texans have experienced power outages, he said.

Preparation by local officials, the evacuation of 8,500 people from southeast Texas, and the storm moving east and weakening saved lives, Abbott said.

"While we are grateful that the damage of Hurricane Laura was far less severe than expected, many communities in Southeast Texas have experienced significant damage from this storm – and the state of Texas is already initiating recovery efforts and ensuring these communities have the support they need to rebuild," Abbott said. "I am thankful for the proactive leadership by local officials and for the way Texans in the region took action to protect themselves and their families by evacuating ahead of the storm.”

No single loss of life has been reported in Texas, the governor said, which was “a miracle.” One unconfirmed death in Sabine County was mentioned, he said, but he could not confirm it.

“That is the only report that I’ve received, at all, about any potential loss of life,” he said. “If we make it through a Category 4 hurricane that ripped through the coastline all the way up to the Texarkana area, and we have ... minimal loss of life, that is a miracle.”

National Guard, state and local law enforcement and recovery teams are already on the ground surveying damage. A number of medical resources were deployed ahead of the storm and remain in affected areas to assist in recovery efforts, the governor’s office said. Over 350 Emergency Medical Task Force members are currently deployed, and over 144 hurricane evacuation missions have been conducted.

Tree damage has been reported in Jefferson, Hardin and Orange counties. Orange County has also reported structural damage. Once roads are cleared and damage is assessed, local officials will tell residents when it is safe to return home.

“Every time we face a disaster, Texans step up to help each other get out of harm's way and back on their feet,” U.S. Sen. Ted Cruz, who attended the news conference, said. “Today, we’re standing ready to help our neighbors in Louisiana recover from Hurricane Laura because that's who we are as a state, and that's who we are as a nation.”

Laura has weakened into a Category 2 hurricane as it moves deeper inland over Louisiana.

The Texas Hurricane Center and Texas Ready have posted information to help Texans in the aftermath of the storm. Those whose property has been impacted can register their sustained damage with FEMA by calling 1-800-621-3362. For help filing a personal claim, residents can call the Texas Department of Insurance's Consumer hotline at 1-800-252-3439.
Texas