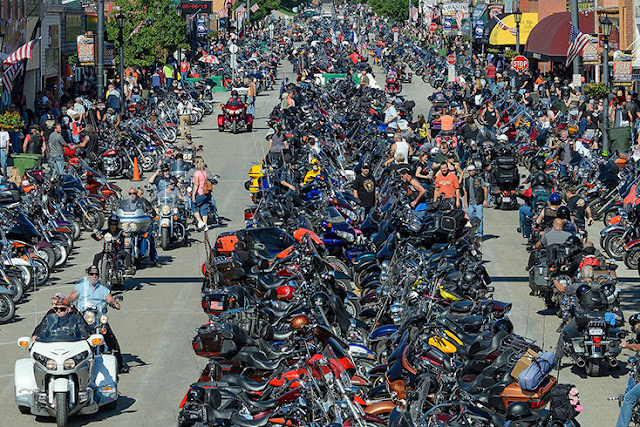 Organizers of a South Dakota motorcycle rally are expecting as many as a quarter of a million people to show up in the small town where the event is hosted in the coming days.
The Associated Press reported that city officials in Sturgis have been notified to expect as many as 250,000 rallygoers in town between Friday and Aug. 16 for the Sturgis Motorcycle Rally, an annual gathering at Buffalo Chip, a campground located in the area.
Sturgis only has 7,000 year-round residents, some of whom criticized plans for the rally to go on as planned during the coronavirus pandemic at a town meeting in June, according to the AP.
The rally is typically even larger; 250,000 is the estimate from city officials who said that travel restrictions from Canada and other areas had cut down on the number of potential attendees.
“This is a huge, foolish mistake to make, to host the rally this year," resident Lynelle Chapman said at the June meeting. “The government of Sturgis needs to care most for its citizens.”
A survey reportedly taken by the city indicated that 6 in 10 residents said it should be postponed. The owner of Buffalo Chip campground told the AP, however, that the rally would go on as planned due to it being his only business for the year.
“We spend money for 355 days of the year without any return on it, hoping people show up for nine days," Rod Woodruff said. “We're a nine-day business.”
“It's the biggest single event that's going on in the United States that didn't get canceled,” he added. “A lot of people think it's going to be bigger than ever.”
South Dakota never issued a stay-at-home order during the pandemic and has seen its rate of new coronavirus cases increase in recent days, though it remains under levels seen in the spring and early summer.
Just over 9,000 cases have been confirmed across the state, and 135 deaths have been recorded.
National