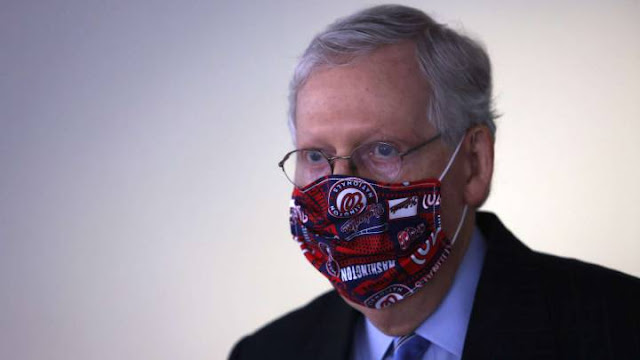 The Senate left Washington, D.C., on Thursday until September — the latest sign that a deal on a fifth coronavirus relief package is, at least, weeks away.

Senate Majority Leader Mitch McConnell (R-Ky.) had kept the chamber in session this week, which was technically the first in its August recess, as a last-ditch attempt to create space for the administration and congressional Democrats to get an agreement.

But with talks stalemated, senators argue there is little reason for them to keep holding daily, roughly 1 1/2-hour sessions. The House already left town and isn't expected to return until Sept. 14.

“We will have our regular pro forma meetings through the end of the state work period. If the Speaker of the House and the minority leader of the Senate decide to finally let another package move forward … it would take bipartisan consent to meet for legislative business sooner than scheduled,” McConnell said as he wrapped up the Senate until next month.

McConnell added that he hoped the Senate would be able to “act sometime soon.”

Senators will get at least 24 hours notice to return if congressional Democrats, Treasury Secretary Steven Mnuchin and White House chief of staff Mark Meadows are able to break the impasse and votes are scheduled. Otherwise, the Senate will formally reconvene on Sept. 8.

Sen. Chuck Grassley (R-Iowa) predicted during a conference call on Tuesday that if negotiators didn't restart by Thursday, the administration's executive orders would be the only action that takes place until early September.

“If it doesn’t happen in the next 48 hours, I think this is all you’re going to see until Congress gets back into session after Labor Day," Grassley told reporters.

There's little reason to think a deal will be reached before then.

The four key negotiators have not met in person since Friday, when the talks officially collapsed.

And the only contact to take place this week — Mnuchin calling House Speaker Nancy Pelosi (D-Calif.) on Wednesday — resulted in dueling statements that only illustrated how stalemated the negotiations on coronavirus relief have become.

Democrats in the House approved a relief package of over $3 trillion, and offered to come down to $2 trillion. Republicans and the White House have refused to move from $1 trillion.

"We are miles apart in our values," Pelosi told reporters on Thursday. "Perhaps you mistook them for somebody who gave a damn. That isn't the case. This is very far apart."

Asked when her next talk would be with Mnuchin and Meadows, Pelosi responded, "I don't know. When they come in with $2 trillion."

White House economic adviser Larry Kudlow, speaking to reporters on Thursday, said the talks are at a "stalemate."

"As Secretary Mnuchin said yesterday, the Speaker wants a $2 trillion commitment from us. We're not going to give it. There are too many things, too many asks on their side that don't fit, don't have anything to do with COVID, for that matter," he said.

Beyond a top-line figure, the two sides haven’t resolved how much weekly unemployment benefits would be, how much money to give state and local governments or how to address McConnell’s red line of liability protections for businesses that open back up. School funding, both the amount and how it's divided up, remains a sticking point as well.

The inaction comes as the unemployment rate is at 10.2 percent, down from a peak of 14.7 percent in April but still slightly higher than the peak during the Great Recession. And the country continues to report tens of thousands of new coronavirus cases per day, including reporting nearly 1,500 coronavirus deaths on Wednesday in what is the highest number of daily deaths since mid-May.

Mnuchin and Meadows have been providing daily updates to Senate Republicans, but senators have said there is little reason to think a detente between congressional Democrats and the administration is on the horizon.

“Basically, not much new movement,” said Sen. Roy Blunt (R-Mo.) after a call this week.

The stalemate is taking place less than three months before the November election, injecting more politics into the dynamic compared to the four previous coronavirus relief bills that passed the Senate with either no opposition or only a handful of “no” votes.

Vulnerable incumbents in both parties have sent warning signals this week to leadership that they need to cut a deal.

Rep. Max Rose (N.Y.), a freshman Democrat in a district President Trump won in 2016, told CNN that "I share the concerns that I'm hearing from my constituents: I'm pissed. I'm angry. ... At this point, it's a middle finger to the American people."

Sen. Susan Collins (R-Maine) — who faces a tough reelection bid as one of two GOP senators running in a state won by 2016 Democratic nominee Hillary Clinton — said on Thursday that she thought the Senate should reconvene next week to try to work on an agreement and force members to vote on coronavirus relief proposals.

“Have people step up to the plate,” she told the Sun Journal.

But even though the Senate has been in session the week, the Capitol has largely slid into its normal summer routine with only a handful of senators spotted around the chamber.

Instead, the brief sessions have largely been used for senators to trade blame over the inability to get a deal, providing a daily look at how far apart the two sides are.

McConnell on Thursday accused Democrats of holding an agreement “hostage” and “barely even pretending to negotiate,” while warning that voters were watching.

“By now the whole country knows what I’m talking about, the absurd issues which the Democrats have turned into sticking points,” he said.

Sen. Tim Kaine (D-Va.) shrugged off the comments, noting the GOP leader is facing his own headache with, by McConnell’s own estimate, up to 20 senators prepared to vote against any deal. The GOP divisions captured the political spotlight for weeks, and undermined the negotiating hand for Meadows and Mnuchin.

“He's gotta say something,” Kaine said. “And, you know, I think he's done what he can do with the Senate GOP. When he candidly acknowledged, ‘look, there's gonna be at least 20 members of Congress who won't vote for a single dollar’s worth of aid,’ he basically at that point is saying, ‘Dems, you gotta work it out with the White House.’”