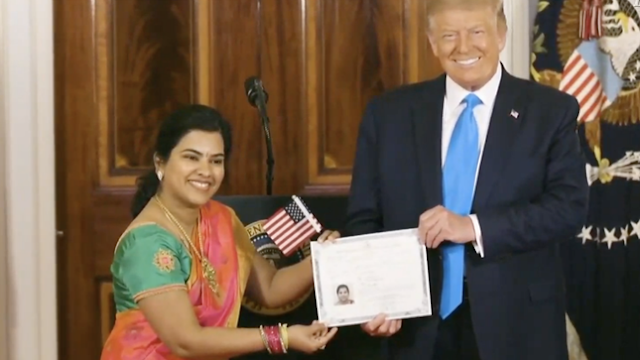 President Trump presided over a naturalization ceremony for five new U.S. citizens at the White House, with the event airing Tuesday evening during the Republican National Convention.

Featuring such a ceremony – especially one taking place at the White House during a political party’s convention – is highly unusual. It was the second time on Tuesday the convention featured Trump acting in his official capacity as president. Earlier in the evening, convention programming included a clip of Trump’s pardon of a convicted bank robber who now runs a nonprofit for prisoners.

“You follow the rules, you obey the laws, you learned our history, embraced our values and proved yourselves to be men and women of the highest integrity,” he added. “It’s not so easy. You’ve been through a lot.”

Throughout his presidency, Trump has sought to limit legal immigration and crack down on illegal immigration, vowing for years to build a massive wall along the U.S.-Mexico border. The naturalization ceremony comes as Trump and Republicans seek to cast a more optimistic view of the president’s tenure in office as the campaign enters its final 10 weeks.
National