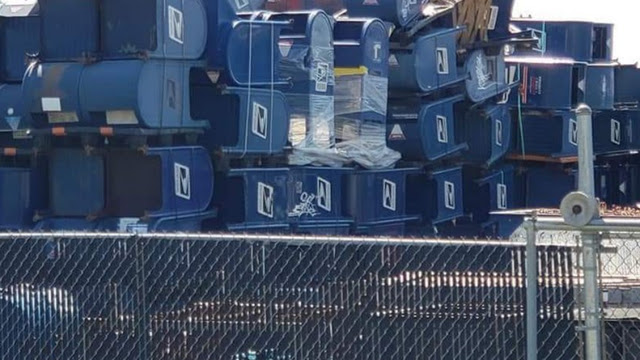 The U.S. Postal Service (USPS) on Tuesday rejected accusations that a viral photograph showing a stack of discarded mailboxes was a symbol of attempted voter suppression, saying it is a long-running, standard practice to remove and replace little-used or dilapidated boxes.

The USPS told a USA Today fact-checker that the viral photograph showing dozens of mailboxes was taken in Hartford, Wis., but could be misleading.

“The photo in question is of a vendor we have done business with for several years. They are a contractor that repairs or destroys old collection boxes. They now make new collection boxes also. Photos such as this appear every couple of years,” the USPS said in a statement.

The agency said it works every year to identify redundant or little-used collection boxes as First-Class Mail declines over time. If a box is selected for potential removal,  notices are placed on boxes to give customers an opportunity to comment before the removal decision is made.

“Given the recent customer concerns the Postal Service will postpone removing boxes for a period of 90 days while we evaluate our customers’ concerns,” the agency said in a statement.

“Photo taken in Wisconsin. This is happening right before our eyes,” the most widespread caption reads. “They are sabotaging USPS to sabotage vote by mail. This is massive voter suppression and part of their plan to steal the election.”

USA Today discovered that the image was in fact taken in Wisconsin. It appears to show Hartford Finishing, a company that specializes in powder painting systems. The USPS confirmed to the outlet that the agency has a working relationship with the business.

Images of the stacked mailboxes can be seen back in August 2019 from the Street View image on Google Maps, according to the outlet.

The USA Today fact-checking team ultimately rated the claim that the image depicts voter suppression as false, ruling that while the picture was taken in Wisconsin but there is “no proof of anything nefarious.”

President Trump faced bipartisan criticism last week after he suggested that he was unwilling to make a deal with Democrats on a coronavirus stimulus bill including USPS funding because it would prevent universal mail-in voting during the election.

Trump has for weeks made claims about mail-in voting, saying that the election will be "rigged" and "fraudulent” if Americans use the practice. Experts have insisted that there is no meaningful evidence suggesting mail-in voting contributes to voter fraud.

Trump’s new postmaster general, Louis DeJoy, a prominent Trump and GOP donor appointed in May, is being reviewed by the agency's inspector general for a series of changes he implemented. DeJoy has said the moves are cost-cutting measures meant to help the agency, which has long faced financial problems.

DeJoy announced on Tuesday that he would pause those operational changes until after the election.

"To avoid even the appearance of any impact on election mail, I am suspending these initiatives until after the election is concluded,” DeJoy said in a statement.