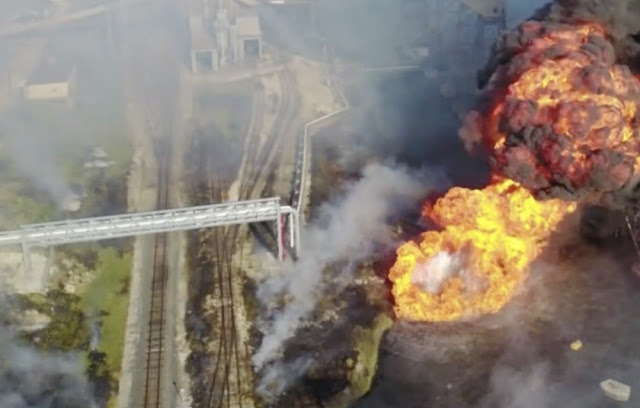 Fire crews were dispatched to an explosion near the Port of Corpus Christi and refinery row just after 8 a.m on Friday, August 21.

Fire Chief for the City of Corpus Christi, Robert Rocha, says Refinery Terminal Fire Crew and the Corpus Christi Fire Department are on the scene near Lantana and Up River Road.

There were 18 people on board a huge barge located in the Corpus Christi Ship Channel and officials said at least three people suffered severe burns in the explosion and have been transported by helicopter to a burn unit in San Antonio, Texas.

An unknown amount of people have been hospitalized and Chief Rocha says two others refused treatment at the scene. Four people that were involved in Friday's explosion are still missing along the Corpus Christi Ship Channel.

The Coast Guard said in a news release that two people out of the six-person crew have been rescued from the Waymon L Boyd after it caught fire in the Port of Corpus Christi Ship Channel.

The Coast Guard Captain of the Port of Corpus Christi has also closed the Inner Harbor.

The Port of Corpus Christi stated the following in response to the explosion:

"Port authorities received notification at 08:00 of a fire that involved a natural gas pipeline. The operators have isolated the line and are working with emergency responders and stakeholders to contain the incident and ensure area safety. The U.S. Coast Guard issued a safety zone in the Corpus Christi Ship Channel Inner Harbor, from the Inner Harbor Bridge (U.S. Hwy 181) to the Viola Turning Basin. No vessel may enter the safety zone without permission from the U.S. Coast Guard. At this time, there is no threat to public safety. The Port of Corpus Christi is committed to informing our communities and will share updates as they become available. The safety of our employees, stakeholders, and community remains our top priority,” said a spokesperson for the Port of Corpus Christi.

Sean Strawbridge, the Chief Executive Officer at the Port of Corpus Christi, confirmed that the explosion was indeed caused by a propane line.

Strawbridge says this was a private dock and was part of a private dredging operation that somehow clipped the propane pipeline. That propane line has been shut off but officials say some propane still remains in the pipeline.

Chief Rocha says citizens should not be concerned about hazardous materials and reveals the Emergency Management has not been called to action, nor have any evacuations been ordered.

Rocha says a large amount of smoke from Friday morning's explosion is being pushed away from the city by winds.

"The State of Texas is working closely with local partners in Corpus Christi as well as the Coast Guard to assist with emergency response efforts following the explosion. Texas Division of Emergency Management and Texas Department of Public Safety personnel are already on the ground to provide support, and the Texas Commission on Environmental Quality is monitoring air quality in the area. The state stands ready to provide any additional personnel and resources needed to address this event and keep Texans in the area safe. We will continue to monitor the situation, and I ask all Texans to pray for the men and women responding to the explosion and for the safety of those in the area."
Texas