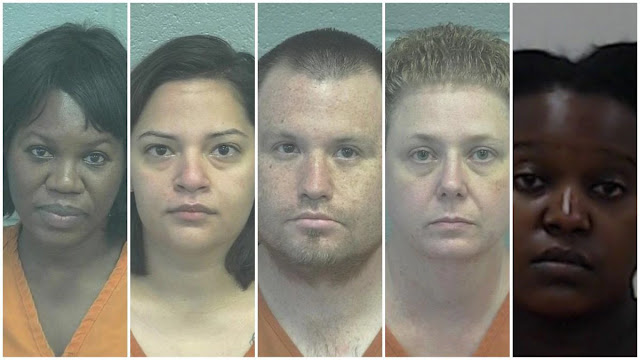 Five nurses have been charged in connection to the death of a man who was in the custody of the Midland County Detention Center.
Adeola Adesomi, 41, Flor Estrada, 30, Timothy Forbush, 28, Kelly Robins, 52, and Lilian Okeri, 27, have all been charged with Manslaughter, Criminally Negligent Homicide and Tampering with a Government Record.
Savion Hall died at a hospital in Lubbock on July 19, 2019. The Midland County Sheriff’s Office started an investigation following Hall’s death, which was turned over to the Texas Rangers.
According to indictments, the suspects are accused of causing the death of Hall by failing to maintain records to allow proper medical care to be provided to him.
The indictment further states that the suspects are accused of making false entries on medical records involving Hall.
The five suspects were not employees with Midland County. According to District Attorney Laura Nodolf, the suspects were contractors.
Nodolf says the State was delayed in presenting the case to a Grand Jury due to the COVID-19 pandemic.
Local News