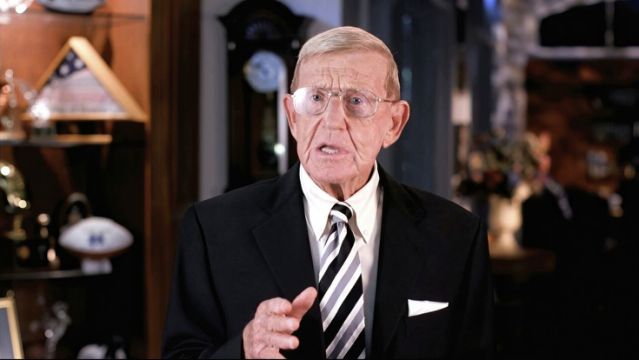 On the third night of the Republican National Convention, former Notre Dame head football coach Lou Holtz addressed the crowd, calling Trump “a consistent winner, an outstanding leader [who] deserves to be reelected as our president.”

“There’s a statue of me at Notre Dame,” Holtz said. “I guess they needed a place for the pigeons land, but if you look closely, you will see these three words there: trust, commitment, and love. All my life, I’ve made my choices based on these three words. I use these three rules to make choices about everything.”

Holtz went on to call the Joe Biden–Kamala Harris ticket “the most radically pro-abortion campaign in history” and suggested that Biden is “Catholic in name only” because he has “abandoned innocent lives.” Holtz then explained why he has chosen to support Trump’s reelection campaign.

“While Coach Lou Holtz is a former coach at Notre Dame, his use of the University’s name at the Republican National Convention must not be taken to imply that the University endorses his views, any candidate or any political party,” Fr. Jenkins wrote. “Moreover, we Catholics should remind ourselves that while we may judge the objective moral quality of another’s actions, we must never question the sincerity of another’s faith, which is due to the mysterious working of grace in that person’s heart.”

While Fr. Jenkins is right, of course, that only God can judge the heart of another man, his choice to target Holtz for endorsing Trump is odd given the university’s recent decisions to honor a series of Democratic politicians. In 2009, for instance, Notre Dame hosted newly inaugurated president Barack Obama to address the university’s commencement ceremony and bestowed on him an honorary degree. Though this decision rankled Catholic students, faculty, and alumni who rightly objected to a number of Obama’s policy stances that directly contradict fundamental Church doctrine, Notre Dame’s leadership refused to reconsider.

In 2016, the university honored then–vice president Joe Biden with the Laetare Medal, an award given each year to a public figure for excellence in Catholic leadership. This was another odd choice, one that seems to contradict Fr. Jenkins’s recent statement, especially considering that Biden has, throughout his long political career, advanced policies that flout Church teaching on issues such as the dignity of human life, the nature of marriage as between one man and one woman, and the rights of religious free exercise and conscience.

Finally, this summer, Notre Dame’s Institute for Advanced Study named former South Bend, Ind., mayor Pete Buttigieg as a faculty fellow for the coming academic year, despite the fact that his political career, like those of both Obama and Biden, has featured a number of policy positions that directly contradict the Catholic Church’s teaching on key issues.

That Notre Dame’s leadership saw no problem with conferring those honors on politicians who controvert Church teaching but went out of its way to disavow a former football coach for mentioning his work at Notre Dame as he endorsed Trump speaks volumes about the university’s distorted priorities.