Newsflash: Yes, a cabinet secretary can address a political convention 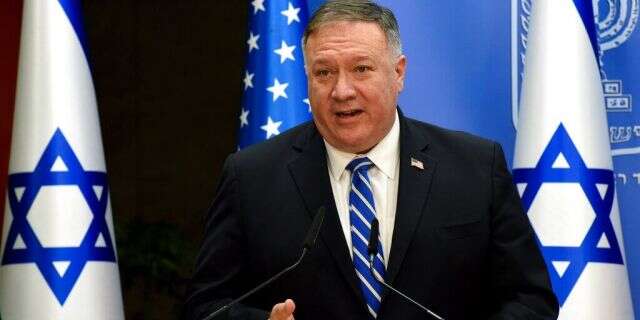 Over at Slate, Fred Kaplan fumes about Mike Pompeo’s speech from last night and writes, “no secretary of state has ever spoken at a party convention. The Hatch Act forbids federal employees from taking part in political campaigns. Pompeo also violated his own guidance, sent to his underlings on Feb. 18 of this year. A bold-faced sentence in that memo read: ‘Senate-confirmed Presidential appointees may not even attend a political party convention or convention-related event.'”
But the Hatch Act doesn’t bar cabinet officials from speaking at political events. The rules state that a cabinet official “may not use the official title ‘Secretary’ when engaging in political activity, such as speaking at a political campaign event. However, a Cabinet secretary may use a general form of address, such as ‘The Honorable,’ when engaging in political activity, as such address does not identify his or her position.”
If it seemed a little odd that Pompeo began his speech by declaring, “I have a big job . . . as Susan’s husband, and Nick’s dad,” it’s because this is a way of saying, “I’m the Secretary of State, but I can’t say that out loud. I know that, and you know that, but to keep in line with the Hatch Act, I have to pretend that I’m just some ordinary citizen, speaking to you from the roof of the King David Hotel, looking out on the Old City, talking about how amazingly the administration’s foreign policy is going.” Kaplan is correct that it is absurd. But Pompeo’s speech was in line with a law that draws these sorts of absurd distinctions.
In 2012, six cabinet secretaries addressed the Democratic National Convention in Charlotte: Secretary of Health and Human Services Kathleen Sebelius, Secretary of the Interior Ken Salazar, Secretary of Agriculture Tom Vilsack, Secretary of Education Arne Duncan, Secretary of Veterans Affairs Eric Shinseki, and Karen Mills, administrator of the U.S. Small Business Administration . . . which yes, was elevated to Cabinet-level in the Obama years. In fact, unlike the other cabinet secretaries, the screen behind Mills specifically identified her as “Administrator Small Business Administration” . . . but it didn’t use the word ‘Secretary,’ so maybe it’s not a violation of the Hatch Act.
Opinion