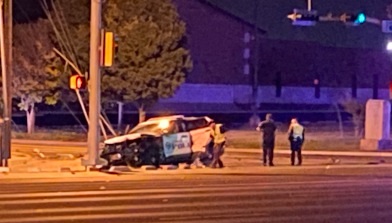 The Lubbock Police Department has released more information about a crash involving an officer in southwest Lubbock early Friday morning.

LPD reports Bryce Kiser, 22, was driving northbound on Iola and Officer Jim Dukatnik, 44, was driving a police SUV westbound on 82nd Street. They crashed in the intersection. The department did not specify in its news release if it is known who had a green light.

Both drivers are in the hospital with serious injuries. We will have more information on this developing story.
Local News