Kevin McCarthy: 'There is no place for QAnon in the Republican Party' 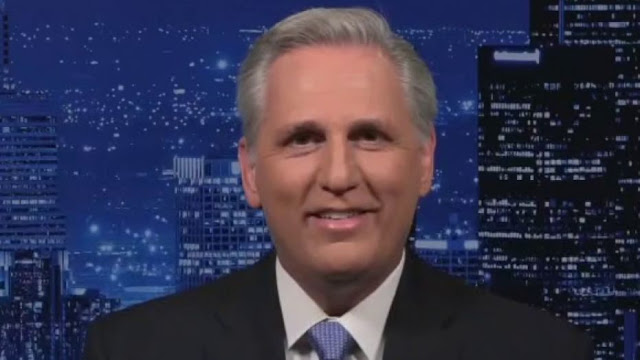 McCarthy said during an interview on Fox News on Thursday evening that “there is no place” in the GOP for the theory, which posits that President Trump and his allies are working to expose an elite group of Democrats, media figures and celebrities who are running an international child trafficking ring.

The unfounded theory drew broader attention after Marjorie Taylor Greene won the GOP primary for Georgia’s 14th District last week. Greene previously embraced the theory in YouTube videos but has since attempted to distance herself from it, saying it no longer represents her views.

“Let me be very clear," McCarthy told Fox News. "There is no place for QAnon in the Republican Party. I do not support it and the candidate you talked about has denounced it."

Vice President Pence also dismissed QAnon on Friday, telling "CBS This Morning" that he doesn't "know anything about that conspiracy theory," adding when pressed: "I dismiss it out of hand."

Later on CNN, Pence disputed the idea that Trump had seemingly embraced the theory when he told reporters Wednesday that those who subscribe to the theory "love our country." Trump had said he wasn't very familiar with the theory.

“You said the president seemed to embrace it. I didn’t hear that,” Pence told CNN’s John Berman on “New Day.” “I heard the president talk about he appreciates people that support him.”

In addition to her remarks on QAnon, Greene came under fire after videos emerged of her making bigoted  comments and questioning whether a plane crashed into the Pentagon on 9/11, remarks she later walked back.

A number of GOP lawmakers have expressed concerns that Greene’s comments and association with QAnon could stain the party’s image and potentially have a negative effect on vulnerable members’ races this year.

McCarthy emphasized Thursday that Greene has distanced herself from the QAnon theory and deserves a chance to prove herself once elected to the deep-red district.

“I've had discussions with Marjorie Greene, she won that primary, and she recently came out and denounced the Q organization, whatever beliefs. I do not agree with their beliefs at all, and she denounced those,” he said during an appearance on C-SPAN on Wednesday.

“I believe everybody has an opportunity from that standpoint. And the discussions I've had with her, I think she will continue to work to show people that lots of times impressed today imply something different — she's a small business owner and she'll be given an opportunity.”

McCarthy noted that he has taken action in the past to remove members from committee assignments following racist remarks, referencing action taken by the House GOP Steering Committee last year to remove Rep. Steve King (R-Iowa) from the panels he served on following comments made to The New York Times questioning when terms like "white nationalist” became offensive. McCarthy said any unacceptable remarks made by members in the future will be addressed in a similar fashion.

“You watch my actions as leader, we've had one member say things that I think went against what the party of Lincoln would stand for and I removed that individual from committees,” he said in the C-SPAN interview.

Other GOP leaders have also recently come out against QAnon since the previously far-right fringe conspiracy theory was thrust into the national spotlight amid Greene's congressional bid.

During Greene’s primary race, House Minority Whip Steve Scalise (R-La.) actively backed her opponent, neurosurgeon John Cowan, after the inflammatory remarks emerged, having both maxed out on donations and holding a fundraiser in an attempt to boost her rival.

House Republican Conference Chair Liz Cheney (Wyo.), the No. 3 GOP lawmaker in the House, also came out against QAnon on Thursday.

“QAnon is a dangerous lunacy that should have no place in American politics,” she said in a statement.
National