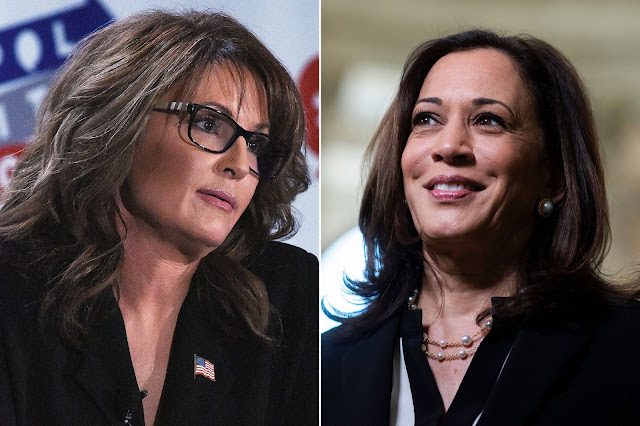 In the first 24 hours since the Biden campaign named Kamala Harris as the party’s vice presidential nominee, I’m suddenly reminded of Sarah Palin. Now, Palin’s career path to the Republican nomination was much shorter. And in retrospect, she looks more like a novelty politician of a different era. Harris has more staying power.

But the Republican ticket in 2008 was led by John McCain who, like Joe Biden today, is not a hate figure for the other side. There was something almost sleepy about the contest. And then Palin happened. Suddenly, a huge number of conservative cultural populists got engaged with the race in a way they hadn’t been before. In turn, that energized the left in a big way, who fired back from the cultural heights.

That dose of new energy is in evidence all across my social-media feeds, where upwardly mobile and suburban liberal women are thrilled by the choice. The New York Times seemed to finally snap to attention and get more engaged with the campaign yesterday, producing an embarrassing hero-cover for Harris this morning. What suck-ups.

And conservative Republicans suddenly seem more interested in heading off a Harris-era before it starts.

Harris is being showered with praise today from the Democratic Party. I suspect the polling will show that she is at this moment, and perhaps for the next few weeks, as popular as she will ever be in this campaign. Why? History.

Ben Domenech writes in his newsletter that a Democratic commentator of his acquaintance describes Harris this way: “You love her on the first date, you like her on the second, on the third you’re done.” Ouch.

Shortly after Harris announced she was running for president on January 21, 2019, favorable media coverage boosted her in the polls, and she rose to a strong third place in a crowded primary. As of February 24, 2019, she enjoyed 12.3 percent support, according to the RealClearPolitics average of polls. Alas, that was as good as it got for her, except for a brief surge after she sandbagged Joe Biden in the debate on June 27 with a pre-scripted attack suggesting his busing policies were racist. That attack catapulted her from seven percent support to a peak of 15.2 percent on July 6, 2019, according to the RCP average.

Followup reporting showed that her attack on Biden was purely opportunistic and cynical; after passionately supporting federal busing in the debate (“that’s where the federal government must step in”) she reversed course, which left very little daylight between her position and Biden’s. It turned out the wet-firecracker busing attack was all she had, and she sank steadily as the debate season rolled on. By mid August, she was back down to eight percent support. By mid September, six percent. By mid October, five percent. When she dropped out of the race in December she was at 3.5 percent.

Harris’s favorability/unfavorability rating is 43/36 according to one poll, 39/43 according to another taken this month. The latter is a very alarming figure for someone who isn’t running for anything, as Harris wasn’t until yesterday. Now that she is in a race again, those numbers are about to get much worse for her.