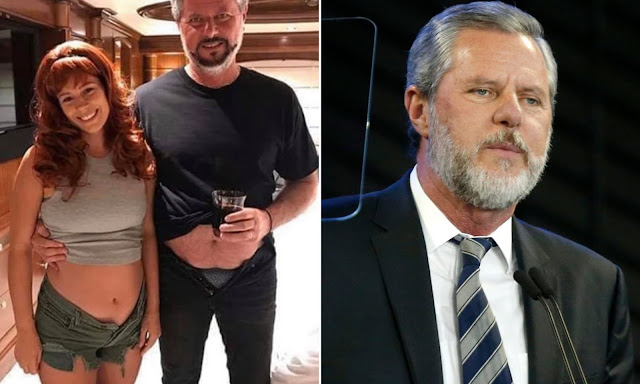 Jerry Falwell Jr. agreed to resign as president of Liberty University on Monday, then withdrew his resignation hours later after media reports of his ouster emerged, then later sent a letter confirming his resignation to school officials.

The almost day-long confusion about his future emerged after Reuters reported that a longtime business associate of Falwell Jr. and his wife, Becki Falwell, claimed the evangelical leader was a willing participant in an affair involving the three of them.

Falwell Jr. reportedly accepted an offer to resign from university officials on Monday following "additional matters [that] came to light that made it clear that it would not be in the best interest of the University for him to return from leave and serve as President," according to a university spokesman.

News of the resignation was leaked to The Washington Post and Religion News Service, with the former citing a university official.

Falwell Jr. then fired back in a phone interview with Virginia Business, denying reports claiming that he had stepped down and calling them "completely false."

In a statement late Monday night, the school stated that Falwell, the son of Liberty founder Rev. Jerry Falwell Sr., had rescinded his resignation after the reports emerged.

"On the first day of classes of Liberty University’s fall term, Jerry Falwell, Jr., agreed to resign as its President and from its Board of Directors, but following media reports about the resignation, withdrew it," read the statement.

"The Executive Committee met this morning and a conference call gathering of the full Board was planned for tomorrow," it continued, adding: "Falwell responded by agreeing to resign immediately as President of Liberty University today but then instructed his attorneys to not tender the letter for immediate resignation. The Executive Committee will go forward with its meeting in the morning followed by the full Board."

In a final statement to ABC News Monday night around the same time as Liberty's statement, Falwell Jr. explained that he had resigned from the university.

Falwell had been placed on indefinite leave by the Lynchburg, Va., university earlier this month following the publication of a photo on his Instagram account in which he was seen with his arm around a woman with his pants unzipped.

The now-deleted photos were apparently taken onboard the yacht of a NASCAR mogul with whom the school had signed a lucrative sponsorship deal under Falwell's direction.

That relationship had faced scrutiny from Liberty's board of trustees in recent weeks following the photos' publication.

The chairman of the board of trustees stepped in as interim president earlier in August, while Falwell issued a public apology for the photos.

Falwell had also faced controversy earlier this year when he posted a picture of himself on social media with a mask mocking the infamous blackface photo from Virginia Gov. Ralph Northam's (D) medical textbook. That scandal led to the resignation of a number of Black staffers at the university as well as the withdrawal of several student-athletes.
National