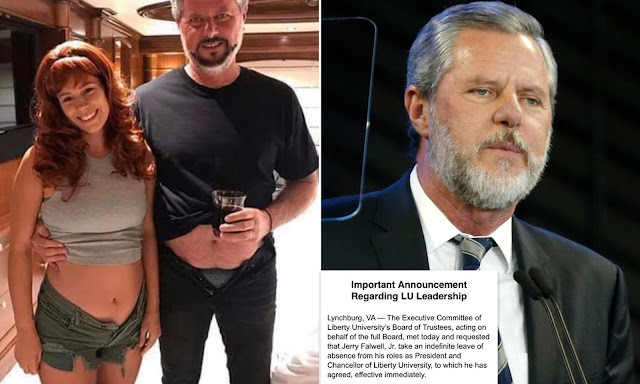 Jerry Falwell Jr., president and chancellor of Liberty University, has been placed on indefinite leave by the institution's board of trustees executive committee.

"The Executive Committee of Liberty University’s Board of Trustees, acting on behalf of the full Board, met today and requested that Jerry Falwell, Jr. take an indefinite leave of absence from his roles as President and Chancellor of Liberty University, to which he has agreed, effective immediately," the private, Christian university said in a statement Friday.

Falwell, who is often in the news because of his known support of President Trump, experienced severe backlash last week after posting a picture on Instagram of himself with his arm around a woman on a yacht, both with their pants apparently unzipped. The post was eventually deleted and Falwell apologized, claiming that the picture was “just in good fun.”

Still, conservative commentators were not pleased with the photo.

"If you're running the largest Christian university in America maybe don't put photos of yourself on social media with your pants undone on a yacht - with random women in bad wigs. So gross, so hypocritical," "The View" co-host Meghan McCain tweeted.

“Jerry Falwell Jr’s ongoing behavior is appalling. As a Music Faculty Advisory Board Member and former instructor [at Liberty University], I’m convinced Falwell should step down,” Walker said in a tweet.

Back in June, Falwell said that he wouldn't wear a mask while in public amid the coronavirus pandemic unless it was emblazoned with a picture from Virginia Gov. Ralph Northam’s (D) yearbook depicting a man in blackface and a man in Ku Klux Klan regalia. Falwell also apologized for this incident, but it still prompted Tayvion Land and Kei’Trel Clark, two of the university's Black football players, to declare their intention to transfer.

Liberty also received widespread criticism at the beginning of the pandemic as it was slow to move its classes online. The university didn't go virtual until 11 days after Northam declared a state of emergency for Virginia and even then, students were allowed to remain on campus and use the dining halls.

"Liberty’s decision to tell its students that they could remain on campus to continue to use their housing, meal plans, parking, and the benefits of the services and activities for which their fees paid, was not only illusory and empty — because there were no more on-campus classes — but it was also extremely dangerous and irresponsible," the lawsuit states.