If fear paralyzes us, it becomes a problem 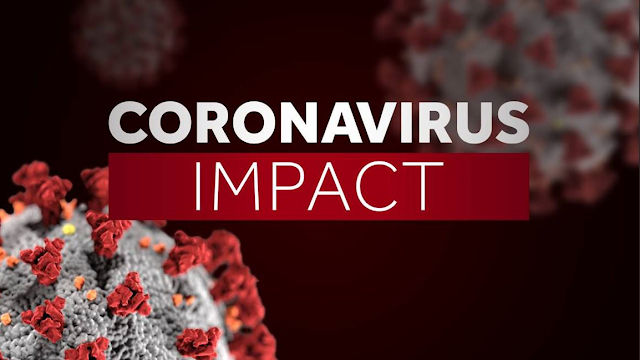 Americans believe that people aged 55 and older account for just over half of total COVID-19 deaths; the actual figure is 92 percent.

Americans believe that people aged 44 and younger account for about 30 percent of total deaths; the actual figure is 2.7 percent.

Americans overestimate the risk of death from COVID-19 for people aged 24 and younger by a factor of 50; and they think the risk for people aged 65 and older is half of what it actually is (40 percent vs 80 percent).

I would agree with the argument that many Americans overestimate the likelihood that COVID-19 will kill them if they catch the coronavirus. They’re probably even overestimating the likelihood that COVID-19 will kill the elderly who catch it. The death rate for those who test positive for the coronavirus over age 80 on Worldometers is 21.9 percent. That’s awful, but it also means that almost eight out of every ten octogenarians who catch the virus will survive.

But a chart from the study, getting widely shared on Facebook, compares apples and oranges by contrasting the percentage of respondents worried about serious health effects from coronavirus compared with deaths reported by the Centers for Disease Control and Prevention: 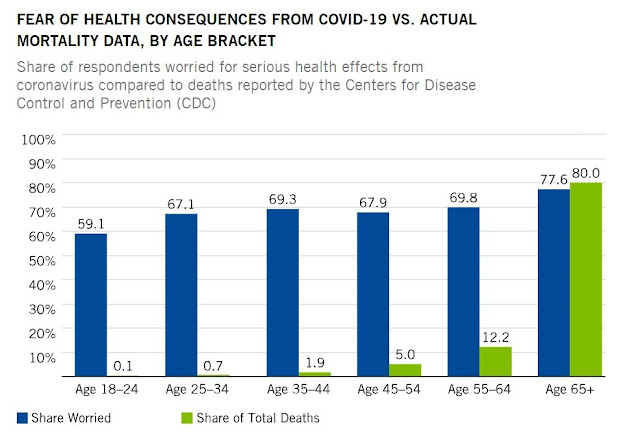 The blue columns are the percent “worried about serious health effects from COVID-19” and the green columns are the percentage of total deaths. I suspect you can see the first problem, which is that COVID-19 can have serious and lingering effects that are serious and yet thankfully short of death. Red Sox pitcher Eduardo Rodriguez’s experience with myocarditis is probably the most high-profile example.

The good news is that a significant chunk of those infected with coronavirus — perhaps 40 percent? — are asymptomatic. Another large chunk will get it, feel like they have a bad flu or the worst flu they ever had, and then make a full recovery. But for an unlucky minority, their bodies are going to be dealing with this for well beyond a two-week window: “Data from the COVID Symptom Study, which uses an app into which millions of people in the United States, United Kingdom, and Sweden have tapped their symptoms, suggest 10 percent to 15 percent of people — including some ‘mild’ cases — don’t quickly recover.” The CDC says one in five previously healthy adults from age 18 to 34 weren’t back to their usual health after 14 to 21 days.

Right now, we just don’t know why some people are not affected or minimally affected, and others are still dealing with health problems months later. (My suspicion is that it has something to do with genetics, and years from now, some geneticist will say, “ah-ha, if you had gene [random letters and numbers that sound like a Star Wars character] you were much more vulnerable to SARS-CoV-2.”)

Should people be afraid of getting coronavirus? Sure. You just don’t know what your genetic lottery ticket says, and so far, we don’t have a test that will tell you that if you catch it, whether you will be asymptomatic, mildly sick, seriously sick, or at death’s door. If you can avoid catching this virus until there’s a vaccine or better treatment, avoid it.

But whether we should be afraid is a different question from what we should do because of that fear.

As Gavin de Becker wrote in The Gift of Fear, fear exists to help the human survival instinct. If fear paralyzes us, it becomes a problem. If someone is so afraid of coronavirus that he never wants to leave his house, his fear has become debilitating. The basic precautions work: wash hands, try to keep six feet of distance from those outside your household, avoid crowds, wear masks.  [Pause for the comments section to turn into an all-out food fight over the issue of wearing masks, as if surgeons wear them because they think every day is Halloween.]

I think our response to the virus has been impeded by two diametrically opposed forces: on one side, voices who insist the virus “isn’t that bad,” is comparable to the flu, and who downplay it; on the other side, people who think that human beings can exist in a prison-like lockdown state for months and months. We were always going to have to figure out a way to live with the virus and a minimal but acceptable risk until a vaccine was available (knocking on wood) late 2020 or early 2021. “Two weeks to bend the curve” and various other slogans and public arguments led a lot of people to believe this was going to be a short-term inconvenience measured in weeks or months, instead of something that was going to disrupt our daily lives for a year .
Opinion