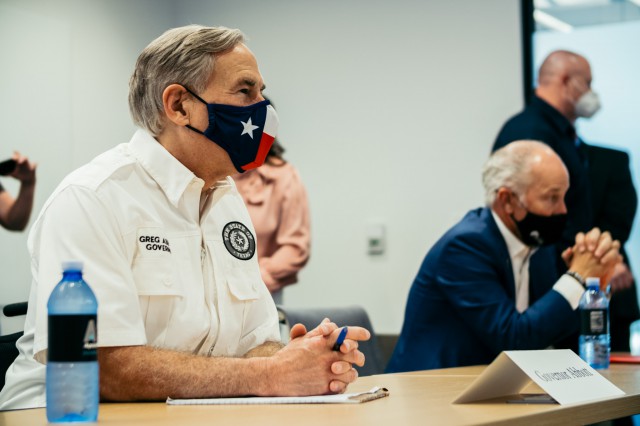 Texas Governor Greg Abbott urged Texans to continue to do everything they can to prevent the spread of COVID-19. During a stop in Lubbock Thursday he said it's understandable that after months of facing a "once-in-a-lifetime challenge", many have COVID fatigue. He said leading doctors throughout Texas continue to point to wearing masks in public as a way to slow the spread of the disease. With a similar message to recent updates from the City of Lubbock, he cited progress in case trends, but emphasized the pandemic is still present.

The governor said social gatherings are contributing to new cases, including even small gatherings of friends and family at homes.

"Until we have better medications that can treat COVID-19...until we have vaccines that will end COVID-19, people must maintain vigilance," Abbott said. "Even when just gathering with family members." A recent poll shows more than a third of Americans would not get a COVID-19 vaccine when it is available.

"We are excited for a vaccine," U.S. Surgeon General Dr. Jerome Adams said Monday. "We're excited for therapeutics. And they're being developed at a record pace. I talk to Tony Fauci almost daily, and he still expects a vaccine by the end of this year or the beginning of the next."

The governor held a briefing with local officials before conducting a news conference at Citizens Tower downtown. Abbott credited Lubbock city, county and school leadership for a collaborative effort the past several months. He also thanked front line medical workers, who are likely the most fatigued from all of this, for their work saving lives.

The statewide COVID-19 dashboard shows there are currently 133,598 active cases, as of Thursday afternoon. There were 6,200 new cases reported Wednesday.

367,354 people have recovered across Texas. 9,034 deaths are attributed to COVID-19, with 324 additional deaths reported Wednesday. More than half a million COVID-19 cases have been confirmed in Texas since the pandemic began.

The positivity rate of tests administered statewide Wednesday climbed above 24 percent, a new high for Texas. Abbott said fewer people are seeking tests, which means a greater percentage of those screened have the virus. But, it isn't for a lack of screening availability. He said there is abundant testing capacity in place.

There were some people who gathered at Citizens Tower urging the governor to ease his order closing bars.

Abbott said bars were a leading factor in the spike in cases across Texas earlier this summer. He said the close nature of patrons, in a situation where they typically can't wear masks while consuming alcohol, make bars problematic to operate during the pandemic. However, restaurants that serve alcohol, and even stay open late, are still allowed to operate, provided a majority of their business comes from food sales.

Some establishments are changing how they operate to re-open.

The governor said a continued period of the state's positivity rate dropping below 10 percent, along with ample hospital capacity across Texas, will be factors in determining when bars can re-open. He said it is not an arbitrary date that can be guessed now; the decision will be made based on data.

There were also some citizens gathered downstairs who want the governor to further ease restrictions on nursing homes and assisted living facilities.

The state recently announced the easing of a few restrictions at these facilities.

The Big 12 is proceeding with its fall football schedule. Lubbock Mayor Dan Pope said Wednesday Texas Tech football brings an economic impact to the local economy of more than $10,000,000. Governor Abbott said the state is collaborating with the Big 12 and SEC as well as its member universities on plans for stadium attendance. The leagues will have the primary role of establishing guidelines, similar to what Major League Baseball, the NBA and NHL have done.

Texas Tech announced Thursday it would limit capacity of the bowl sections of Jones Stadium to 25 percent.