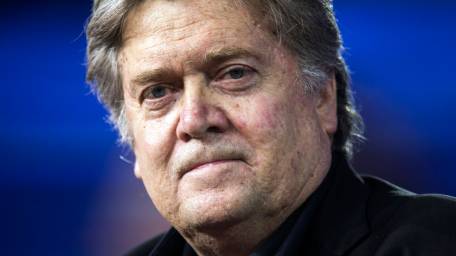 Former White House chief strategist Stephen Bannon and three others were arrested and charged with defrauding hundreds of thousands of donors who contributed to a fundraising campaign for a private border wall, the U.S. attorney's office for the Southern District of New York said Thursday.

Bannon, Brian Kolfage, Andrew Badolato and Timothy Shea allegedly defrauded donors of the online crowdfunding campaign known as “We Build the Wall,” which raised more than $25 million, the office said. The four defendants are expected to appear in court Thursday afternoon.

"As alleged, the defendants defrauded hundreds of thousands of donors, capitalizing on their interest in funding a border wall to raise millions of dollars, under the false pretense that all of that money would be spent on construction," Acting U.S. Attorney Audrey Strauss said.

Bannon, who also served as chief executive of the Trump campaign in 2016, is the latest member of Trump's inner circle to face criminal charges. Former national security adviser Michael Flynn pleaded guilty in 2017 to lying to the FBI about his communications with a Russian diplomat. He has since backed out of a plea agreement and the Department of Justice is seeking to withdraw its case against him.

Paul Manafort, Trump's former campaign chairman, is serving more than seven years in prison on an array of bank and tax fraud charges.

And Trump commuted the three year and four-month prison sentence of his former adviser Roger Stone in July, just days before Stone was scheduled to report to a federal corrections facility.

Kolfage launched We Build the Wall as a crowdfunding campaign on GoFundMe in late 2018, quickly raising more than $20 million, before the site threatened to remove his page unless he identified a valid recipient of the funds.

According to the indictment, Kolfage, Bannon and Badolato then formed a nonprofit called "We Build the Wall, inc." to receive the money that had been raised through the GoFundMe campaign.

Despite Kolfage's promises that he wouldn't be taking a salary, federal prosecutors alleged that the group of defendants schemed to pass along hundreds of thousands of dollars to him to help "fund his lavish lifestyle."

Kolfage allegedly took a total of $350,000 from the organization, passed through a series of bank accounts, nonprofits and bank accounts between January and October of 2019.

One nonprofit controlled by Bannon received more than a million dollars, some of which he passed on to Kolfage, while taking a "substantial portion" for personal gain.
National