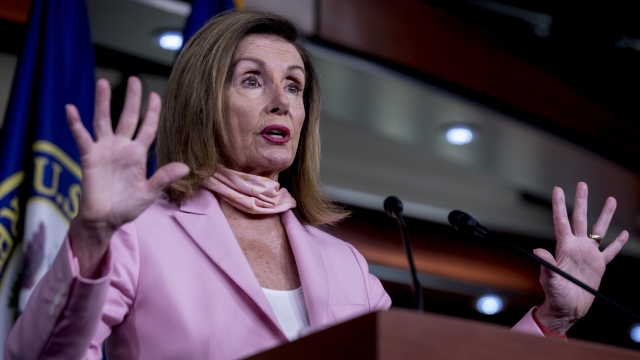 The top Democrats on Capitol Hill are doubling down on their demand for an additional $600 in jobless benefits as part of a coronavirus package, warning that slashing the subsidy would undermine the economic recovery on the whole.

"We're with the 600 [dollars]," Senate Minority Leader Charles Schumer (D-N.Y.) said Thursday during a press briefing in the Capitol.

The posture is an indication that, with federal unemployment subsidies having expired last week — and with Republicans in sharp conflict over a fix — Democrats think they have the leverage to insist on the continuation of the $600 weekly payment, adopted as part of the CARES Act in March.

Schumer predicted a domino effect if the jobless benefits are not restored quickly, warning that evictions will rise, retail spending will fall — and any shot at a timely recovery will be lost.

Appearing with Schumer, Speaker Nancy Pelosi (D-Calif.) said the sides are "making some progress," but emphasized that Democrats "want to see the whole package" as negotiators continue to lumber, inch by inch, toward an agreement.

The suggestion is that Democrats might accept a reduction in the $600 subsidy if the difference was returned to the pockets of the unemployed via some other program, like an increase in the direct payments to individuals and families.

With Republicans showing little interest in hiking worker benefits elsewhere, however, Democrats are sticking with their initial demand.

The size and duration of the unemployment insurance (UI) subsidy has emerged as perhaps the single greatest hurdle to a bipartisan deal on a fifth round of emergency aid, which is designed to address both the health-care needs and economic fallout caused by the fast-spreading coronavirus.

In May, House Democrats had passed a massive $3.4 trillion relief package, including an extension of the $600 weekly UI subsidy through January 2021.

Republicans have argued that, because the subsidy has provided some workers with more income than they earned at the jobs they lost, it's become a disincentive for those beneficiaries to return to the workplace.

More recently, Treasury Secretary Steven Mnuchin and White House chief of staff Mark Meadows — the two administration officials leading the talks for the Republicans — have reportedly offered an additional $400 per week through mid-December.

Yet Democrats haven't budged, noting that scores of states are not equipped to adopt a new payment system quickly.

"Why dismantle a program that almost all economists say is working, and put something new in its place that will take months to go into effect?" Schumer asked.

Emerging from daily meetings with Pelosi and Schumer, Mnuchin and Meadows have grumbled that Republicans are doing all the compromising, while Democrats remain embedded to their initial demands. As a result, the sides remain "trillions of dollars apart," Meadows said Wednesday.

"There are no top-line numbers that have been agreed to," he said.

Complicating the negotiations for the GOP, a number of Senate Republicans have balked at any new coronavirus aid, warning that the resulting increase in deficit spending would do long-term harm to the economy.

That GOP opposition has undermined any leverage held by the White House and Senate Majority Leader Mitch McConnell (R-Ky.), while emboldening Democratic leaders who have wasted no time pointing out that McConnell doesn't have 51 votes for a $200 UI extension, let alone the 60 votes he'd need to defeat a Democratic filibuster.

"The Republicans are in disarray," Pelosi said. "Probably half of them won't vote for anything. Not one dollar."

Amid the impasse, President Trump has said he's considering an executive order to provide some stimulus unilaterally, including an extension of unemployment benefits, a moratorium on evictions of renters and a suspension of the payroll tax, which the president has sought since the start of the pandemic.

It's unclear, however, if Trump has the power to fund those programs without the approval of Congress. And Pelosi, while saying she backs the help for renters, also doubted Trump's sincerity.

"I don't think they know what they're talking about," she said.

Since the UI benefits have expired, Republicans have pushed hard for a much smaller relief package, to address the jobless benefits and threat of evictions while negotiators continue talks on other less-pressing concerns.

Pelosi and Schumer have repeatedly rejected that idea — and did so again on Thursday.

"There's a broad scope of problems, and the worry we have is they'll want to do a little Band-Aid, as I said, vote for one thing, skip out of town, and leave the rest behind," Schumer said.

"We're not having a short-term extension," she said.

Democratic leaders are scheduled to meet again with Mnuchin and Meadows at 5 p.m. on Thursday in the Speaker's office.

As some sign of how far apart they are, McConnell announced that he'll allow senators to leave Washington next week until an agreement is reached.