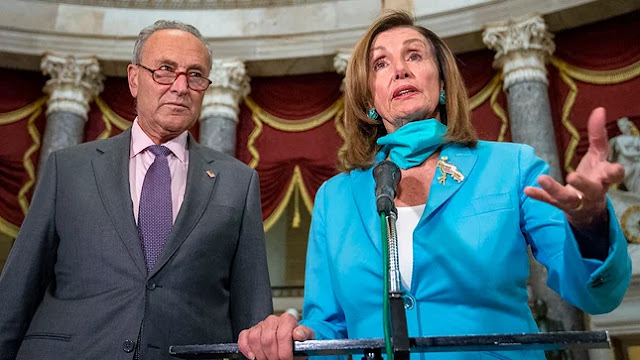 Speaker Nancy Pelosi (D-Calif.) said that as part of a closed-door Thursday meeting, Democrats offered to reduce their $3.4 trillion price tag by $1 trillion if Republicans would agree to raise their roughly $1 trillion package by the same amount.

That strategy, effectively trying to split the difference between the two sides, would result in legislation costing between $2 trillion and $2.4 trillion.

"'We'll take down a trillion, if you add a trillion in.' They said absolutely not," Pelosi said during a joint press conference with Senate Minority Leader Charles Schumer (D-N.Y.) on Friday.

Pelosi and Schumer are expected to meet with White House chief of staff Mark Meadows and Treasury Secretary Steven Mnuchin on Friday. Pelosi said she would make the offer again as part of the private negotiations.

"I will once again make the offer: We'll come down a trillion, you go up a trillion, and then we'll be within range of each other," Pelosi said. "But again, this a very different set of values across the table."

Asked about raising their price tag by $1 trillion, Mnuchin told reporters on Friday: "That's a non-starter."

The cost reductions, according to Pelosi, would largely be achieved by shortening the duration of some programs in the package, such as food assistance.

Meadows, when asked if the tradeoff Pelosi was floating was "in the cards," said: "I don't think so."

"I don't know that that's a reduction as much as she's just changing the time frames. So I don't think that she's come off of her number other than just making it shorter," Meadows said.

The negotiations, which have taken place almost daily for nearly two weeks, have yielded little progress toward an agreement on a sweeping bill meant to counter the health and economic devastation caused by the coronavirus.

Both sides emerged from a closed-door meeting Thursday night warning they were "far apart" — the clearest signal yet that they are unlikely to meet a self-imposed deadline to get an agreement in principle by Friday.

"You should have seen their faces — 'Absolutely not!'" Schumer told reporters Friday. "Basically what’s happening is Mr. Meadows is from the Tea Party ... and they don't want to spend the necessary money. ... They rejected it totally."

Schumer added that a bill with a price tag below $2 trillion could not pass Congress.

In addition to the dollar amount, the four negotiators haven't agreed to several other key issues, including funding for state and local governments, unemployment benefits and Senate Majority Leader Mitch McConnell's (R-Ky.) red line of liability protections from coronavirus-related lawsuits.

Mnuchin said Trump, who had called the GOP negotiators three times during Thursday’s meeting, is simply not willing to sign a bill “that has a massive amount of money to bail out state and local [governments].”

“The president is prepared to do something for state and local that deals with the issue of additional coronavirus expenses,” Mnuchin said, pointing specifically to first responders, hospitals, police officers and teachers.

Pelosi, in a letter to House Democrats on Friday, outlined a list of unresolved issues, showing how far apart the two sides are from even an agreement in principle, with divisions on school funding, money for testing and funding for the Postal Service.

"In the past two weeks of negotiations, we have strived mightily to find common ground," Pelosi said. "However, many critical difference remain."