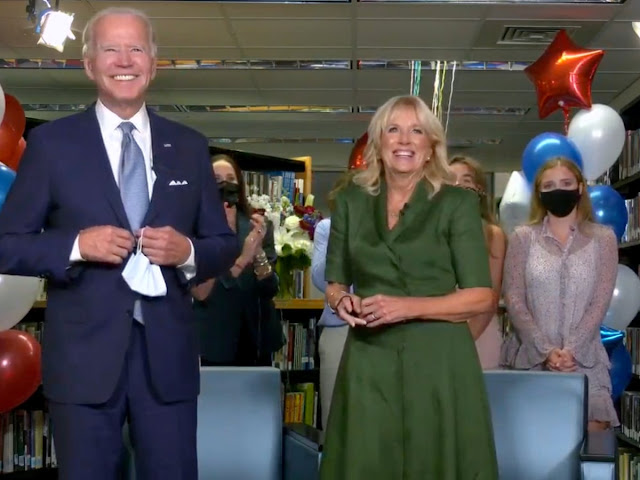 Democrats officially nominated former Vice President Joe Biden to be their presidential nominee on Tuesday night, setting up an election battle against President Trump in November.

Biden’s nomination was expected, and there was no drama as the roll call of votes unfolded at the Democratic National Convention, which is taking place as a virtual event because of the coronavirus pandemic.

Sen. Chris Coons (D-Del.) and Rep. Lisa Blunt Rochester (D-Del.) both gave speeches on behalf of Biden, as did Jacquelyn Brittany, a New York Times security guard who had a viral moment with Biden in an elevator.

“Joe Biden has never forgotten where he’s from,” said Coons, Biden’s close friend who replaced him in the Senate when he became vice president. “He’s been sustained by his faith and his family through the toughest of times, and he has the heart and the compassion for this moment."

In normal times, the roll-call vote to officially nominate Biden would have taken place on the floor of the convention in Milwaukee. But on Tuesday night, Democrats took the roll-call vote virtually, showcasing videos of delegates in every state and territory declaring their support for Biden.

The segment featured videos of delegates speaking in front of geographic markers in their home states, taking viewers from a middle school teacher in Arizona to a gun safety activist in Florida to state Sen. Nikema Williams in Georgia, who is vying to replace the late Rep. John Lewis (D-Ga.) in Congress.

“When my daughter was murdered in Parkland, Joe Biden called to share in my family’s grief,” said Fred Guttenberg, who spoke on behalf of Biden’s Florida delegates. “I quickly learned about his decency and ability, but I also learned about his toughness and how he’s beat the [National Rifle Association].”

Democrats are using the convention to make the case that Biden is best equipped to lead the country out of the coronavirus pandemic, economic shutdown and racial turmoil spreading across the nation.

“Joe has the experience, character and decency to bring us together and restore America’s greatness,” former President Carter said. “We deserve a person with integrity and judgment, someone who is honest and fair, someone who is committed to what is best for the American people.”

The former vice president will leave the convention in a position of polling strength as the match-up against Trump begins in earnest. Biden leads by 7.7 points nationally in the RealClearPolitics average, although that is down from his largest lead of 10.2 points, held in late June.

The Democratic nominee also leads by 5 points or more in the battleground states of Michigan, Wisconsin, Pennsylvania and Florida. He leads by 2 points in Arizona, and the race is effectively tied in North Carolina.

Biden’s nomination comes after fierce debate among Democrats during the primaries over who would be most electable in a match-up against Trump.

Biden seized control of the primaries after Black voters rallied behind him, delivering him resounding victories in the South Carolina primary in late February and in the Super Tuesday primaries in early March.

Biden had effectively pulled away from the massive field of Democratic contenders before the country began to shut down because of the coronavirus.

Biden’s toughest competition for the nomination, Sanders, suspended his campaign in April, giving Democrats several months to unite behind Biden as their likely nominee before it became official.

Sanders spoke on Biden’s behalf at the first night of the convention on Monday, urging progressives to put aside their differences with Biden and to unite behind the shared goal of defeating Trump.

“Our party is united in offering you a very different choice, a go-to-work president,” former President Clinton said. “A down-to-earth, get-the-job-done guy. A man with a mission to take responsibility, not shift the blame. Concentrate, not distract. Unite, not divide. Our choice is Joe Biden.”

Still, Democrats are on edge with 78 days to go until Election Day.

The memories of Hillary Clinton losing the election to Trump after building a sizable polling lead in 2016 are still fresh.

Democrats are worried that the U.S. Postal Service will not be able to handle the expected surge in mail and absentee balloting.

The political and economic landscape is extremely volatile as the nation grapples with the coronavirus pandemic, economic uncertainty and racial protests.