Cornyn addresses next version of CARES Act during trip to Midland 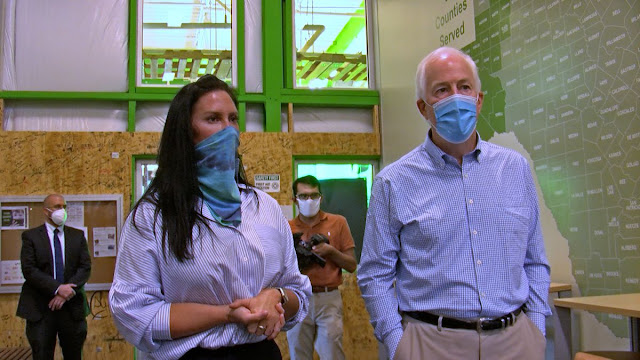 U.S. Senator John Cornyn (R-TX) announced today at the West Texas Food Bank that various entities in the Midland region so far have been allocated $61,132,495 in federal coronavirus relief resources from Congress. While there he helped pack boxes of food for Permian Basin families in need. He was hosted by Food Bank Executive Director Libby Campbell, who provided a tour and briefing about the Food Bank’s response to increased demand in West Texas during the pandemic.

Sen. Cornyn also learned about the West Texas Food Bank’s use of federal resources available through the CARES Act, which he supported in March, as well as their outstanding needs as the Senate discusses a fifth coronavirus relief bill. Leadership from Midland Health and the City of Midland also shared how they have used CARES Act grants to benefit the community.

“In some instances, people ended up making more money not working than working,” Cornyn said. “Obviously, we want to help people, but we don’t want to disincentivize people from safely returning to work. So, we’re going to have to tweak that, and that’s part of the negotiations we’re having now.”

Cornyn went on to say he is optimistic Congress will pass a new CARES Act before the November elections, but worries about a lack of bipartisanship.

“Right now, we’re so close to the election, unfortunately, Congress is starting to show some of its fraying around the edges of bipartisanship., but hopefully we’ll shake that off and mee the demand.”

Thus far, Sen. Cornyn has worked to secure $61 million in funding for the Midland area, including: