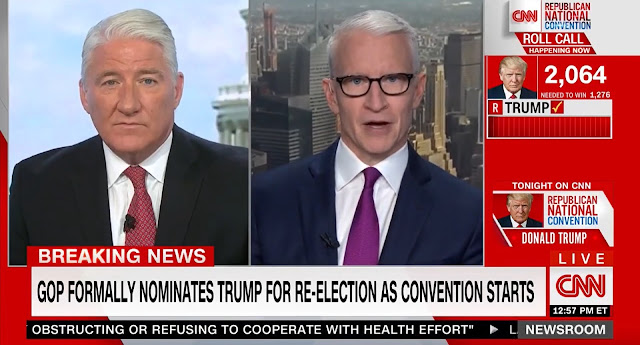 CNN cut away from President Trump's address to delegates at the Republican National Convention in Charlotte, N.C. on Monday, with anchor Anderson Cooper arguing that the president’s speech was comprised of “the most recent greatest hits and false statements" regarding mail-in voting.

"It is sort of all the most recent greatest hits and false statements by the president and I imagine what we’re going to hear a lot this week from the president who clearly wants to be out front every single day," Cooper said.

"It underscores the challenge, Anderson, for us in the news business and really for people watching at home if you are a voter who has not decided — if you are a voter who is not firm in your decision — to watch the next four days, because this is a sad thing to say but a lot of what you just heard from the president of the United States is wrong, misleading, or outright lies," anchor John King added.

"He was the disruptive outsider last time, there were all these character questions about him 2016, but… there were enough people in enough places who wanted something different in Washington,” King later said. “They wanted Washington disrupted, they voted for Donald Trump and he got his electoral college victory. Now he is the beleaguered incumbent, and you’re right, he often almost seems like Pontius Pilate."

In his surprise remarks to delegates after being nominated as the party's 2020 presidential candidate, Trump claimed that decisions to limit some businesses and expand mail-in voting access amid the coronavirus pandemic were driven by a political agenda.

"What they’re doing is using COVID to steal an election," Trump said. "They’re using COVID to defraud the American people, all of our people, of a fair and free election. We can’t do that."

Fox News and MSNBC stayed with the president's address after CNN had cut away.

Trump had early blasted CNN for not covering the roll call of delegates voting on his nomination.

CNN's "Reliable Sources" said prior to the start of the Republican National Convention on Sunday that it would be cutting in to fact-check remarks.

The network didn't cut in to any speeches for fact-checks at the Democratic National Convention last week, drawing criticism from mostly those on the right.
National