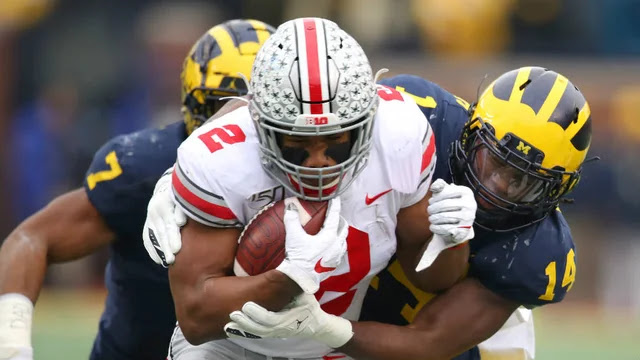 The Big Ten on Tuesday announced the postponement of the upcoming fall football season, becoming the first major athletic conference in the U.S. to take such a step because of the coronavirus pandemic.
The conference said that the decision was based on multiple factors, including medical advice from a task force on infectious diseases.
The move came amid an increasingly vocal debate about whether colleges are prepared to resume play amid a health crisis, with President Trump on Monday joining those calling for the season to go on as planned.
“The mental and physical health and welfare of our student-athletes has been at the center of every decision we have made regarding the ability to proceed forward,” Big Ten Commissioner Kevin Warren said in a statement Tuesday. “As time progressed and after hours of discussion with our Big Ten Task Force for Emerging Infectious Diseases and the Big Ten Sports Medicine Committee, it became abundantly clear that there was too much uncertainty regarding potential medical risks to allow our student-athletes to compete this fall."
Other fall sports including men’s and women’s cross country, field hockey, men’s and women’s soccer, and women’s volleyball will also be delayed. It remains unclear whether the seasons will take place at a later date. The Big Ten said in a news release announcing the decision that there's a possibility the sports could go on as scheduled in the spring.
"Everyone associated with the Big Ten Conference and its member institutions is committed to getting everyone back to competition as soon as it is safe to do so," Warren said.
The novel coronavirus caused the NCAA earlier this year to cancel the men's and women's basketball tournaments and to scrap spring sports. But conferences appeared ready to move forward with the football season in the fall under modified conditions. The Big Ten initially planned a conference-only, 10-game schedule.
However, concerns persisted about how safe players would be living near their respective campuses while playing their sport. Dozens of players from the Pac-12 penned an open letter calling for better health policies and rights for athletes in order for a season to proceed. The Mid-American Conference on Saturday became the first conference to scrap its fall football season.
The decision was followed by reports that university presidents from the 14 schools representing the Big Ten were meeting to deliberate on whether a season would be played amid the pandemic. The presidents voted 12-2 to cancel the season on Monday, according to The Detroit Free Press.
Some of the most prominent players in the sport earlier this week mounted a public campaign pushing for a fall football season so long as athletes' voices were considered and adequate health care was offered. One of the requests was the formation of a union representing college athletes.
As the push gained traction on social media, Trump on Monday tweeted his support.
"The student-athletes have been working too hard for their season to be cancelled," Trump tweeted, sharing the #WeWantToPlay hashtag used by players as part of the campaign.
Sen. Ben Sasse (R-Neb.), a former president of Midland University, also wrote a letter to presidents and chancellors of the universities urging them not to cancel the season, arguing that the "structure and discipline of football programs is very likely safer than what the lived experience of 18- to 22-year-olds will be if there isn’t a season."
Before the decision on canceling the season was official, multiple Big Ten coaches voiced their opposition. Nebraska football coach Scott Frost said during a news conference that the university was committed to play "no matter what," suggesting that the school would consider other options if conference play was canceled.
Michigan coach Jim Harbaugh also issued a letter advocating for a football season, according to MLive.com. In it, Harbaugh said that "that this virus can be controlled and handled because of the facts."
The Pac-12 conference was expected to have a meeting on Tuesday determining whether it would move forward with a season, CBS Sports reported. Other major conferences, including the SEC and ACC, have not given indications about whether they will delay their season.
SEC Commissioner Greg Sankey said in a tweet Monday that he wasn't sure whether a football season could be played amid the coronavirus pandemic.
"We have never had a FB season in a COVID-19 environment. Can we play? I don’t know," he said. "We haven’t stopped trying. We support, educate and care for student-athletes every day, and will continue to do so...every day."
National Sports