Biden says he will lead America out of 'season of darkness' 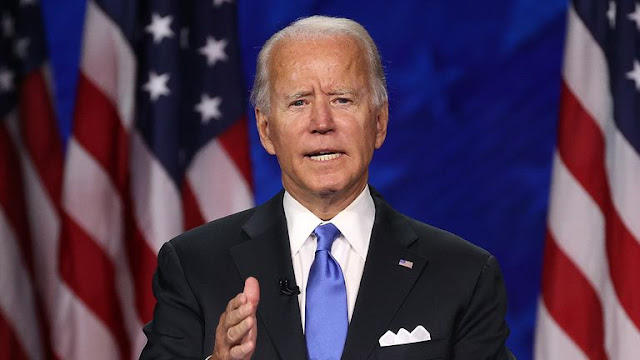 Former Vice President Joe Biden said he’d lead the country out of what he called a “season of darkness” and vowed to “draw on the best” of what America has to offer as he accepted the Democratic presidential nomination on Thursday night, setting up a general election battle with President Trump in November.

In his speech, Biden sought to cast himself as a leader who would unite the country.

“The current president has cloaked American anger for far too long. Too much anger, too much division. Here and now I give you my word — if you entrust me with the presidency, I’ll draw on the best of us, not the worst,” Biden said. “I’ll draw on the light, not the darkness. It’s time for us, for we the people to come together, and make no mistake, we can and will overcome this season of darkness in America. We’ll choose hope over fear, facts over fiction, fairness over privilege.”

Because of the coronavirus, Biden spoke from the mostly empty Chase Center in front of about two dozen reporters. He stood at a lectern emblazoned with “D20” in front of 16 American flags.

“I’m a proud Democrat, and I’ll be proud to carry our banner into the general election,” he said. “So it’s with great humility and a proud honor that I accept this nomination for president of the United States of America.”

For Biden, becoming the Democratic nominee is the culmination of a decades-long political career that has taken him from the Senate to the White House, as vice president under former President Obama.

Biden’s path to the Democratic nomination was also defined by personal tragedy, including the loss of his first wife and young daughter to a car crash in the early 1970s and the death of his son Beau Biden, who passed away from brain cancer in 2015.

Biden prepared for his address Thursday with family, longtime advisers including chief strategist Mike Donilon, speechwriters Vinay Reddy and Carlyn Reichel, and even presidential historian Jon Meacham, who recently penned the book "The Soul of America" and also had a speaking role at the convention.

Biden was introduced by his children Ashley and Hunter Biden, and a video of his late son Beau Biden introducing his father at the 2012 Democratic convention.

The campaign also played a new video touting Biden’s past efforts to reach across the aisle and work with Republicans. The video told the story about how as vice president Biden worked with Republican lawmakers on an economic rescue package following the 2008 financial crisis.

Biden spent the day leading up to the convention at his home with his grandchildren. In a convention video, Biden’s four granddaughters told the story about the family meeting that led to his presidential launch.

The night featured an extended Zoom discussion between Biden’s rivals from the 2020 primary, including Sens. Bernie Sanders (I-Vt.), Elizabeth Warren (D-Mass.), Cory Booker (D-N.J.) and Amy Klobuchar (D-Minn.), who spoke about their admiration for Biden.

His acceptance speech comes one day after former President Obama, in an emotional address, warned voters about a second Trump term.

"This administration has shown it will tear our democracy down if that's what it takes to win," Obama said.

In contrast, Obama — who awarded Biden the Presidential Medal of Freedom — tried to portray a sympathetic partner in the White House.

"Joe is a man who learned early on to treat every person he meets with respect and dignity, living by the words his parents taught him: No one's better than you, Joe, but you're better than nobody,” Obama said. “That empathy, that decency, the belief that everybody counts. That's who Joe is."

In the coming weeks, the Democratic nominee plans to build upon the message of the last four days which told the story of his empathy and compassion. Allies close to him think that narrative meets the moments of where the nation is.

"I think we've done a good job explaining who he is," said one Biden ally close to the campaign. "That's what the number one goal was all along."
National