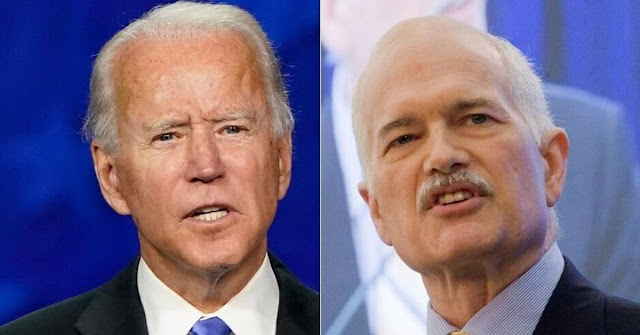 Joe Biden is being accused of plagiarizing the words of a left-wing Canadian politician in his convention speech.

Canadians were quick to point out that those words were extremely similar to the dying message of Jack Layton, the leader of Canada’s New Democratic Party, who in 2011 wrote, “My friends, love is better than anger. Hope is better than fear. Optimism is better than despair."

CBC correspondent Alexander Panetta pointed out the similarities on Twitter.

In a speech at the 1987 Iowa State Fair, Biden used extremely similar language.

''I started thinking as I was coming over here, why is it that Joe Biden is the first in his family ever to go to a university? Why is it that my wife who is sitting out there in the audience is the first in her family to ever go to college?” He continued, ”Is it because our fathers and mothers were not bright? Is it because I'm the first Biden in a thousand generations to get a college and a graduate degree that I was smarter than the rest?''

At the 1987 California Democratic convention, Biden told the audience that ''each generation of Americans has been summoned.” The same phrase was used by John F. Kennedy in his 1961 inaugural address.

Layton himself used similar language to former Canadian Prime Minister Wilfred Laurier, according to the National Post. During World War I, Laurier attempted to unify Canada by telling a crowd that “the solution of these problems you have a safe guide, an unfailing light, if you remember that faith is better than doubt and love is better than hate.”