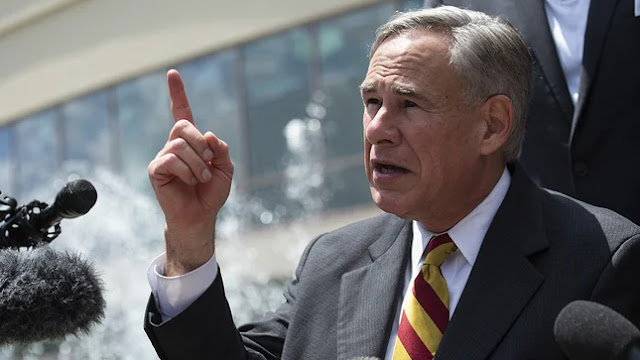 Abbott made the comments at a press conference in Fort Worth. His remarks come after the Austin City Council on Thursday voted to slash the Austin Police Department's budget by a third.

"Part of our job as state leaders is to ensure the safety and security of all Texans, and we will not allow this core function to be undermined by cities that seek to defund and dismantle law enforcement agencies that have a sworn duty to protect our communities," Abbott said.

He added: "Defunding the police puts Texans in danger and invites lawlessness into our cities, and cities that endanger their residents should not be able to turn around and raise more taxes from those same Texans."

Abbott said that he hopes that the Texas Legislature takes up the issue when it convenes for its session next year.

In Austin, the planned police budget cuts total about $150 million. Around $20 million of that will be redirected immediately, shifting funding that was allocated to new cadet classes and overtime to "reinvest in permanent supportive housing and services, EMS for COVID-19 response, family violence shelter and protection, violence prevention, workforce development, and a range of other programs," according to a release from the city.

Additionally, $80 million will be taken from services such as internal affairs and forensic sciences and reallocated to other city departments. The final $50 million will go to the creation of the Reimagine Safety Fund which will look to establish "alternative forms of public safety and community support" outside of the police department over the next year.

The idea of defunding local police departments has been thrust into the national spotlight this summer after George Floyd, a Black man, was killed by Minneapolis police at the end of May. Advocates for the policy change have argued that law enforcement budgets around the country are bloated and that the money would be better spent on social services within communities of color.

Austin was one of numerous large cities nationwide that had weeks of protests over Floyd's death. The Texas Capital has had its own issues with police brutality. Mike Ramos, an unarmed Black and Latino man, was shot and killed by Austin police in April. Then during the Floyd protests, the city's police force critically wounded two protesters — ages 16 and 20 — shooting them in the head with "non-lethal" projectiles, The Texas Tribune reported.

Garrett Foster, an anti-policy brutality demonstrator, was fatally shot by an armed driver July 25 while at a Black Lives Matter protest. The driver has yet to be arrested or charged by the Austin Police Department.

Abbott said that the city council was putting political agendas over public safety with its decision.

"Austin’s decision puts the brave men and women of the Austin Police Department and their families at greater risk, and paves the way for lawlessness," the governor said. "Public safety is job one, and Austin has abandoned that duty."