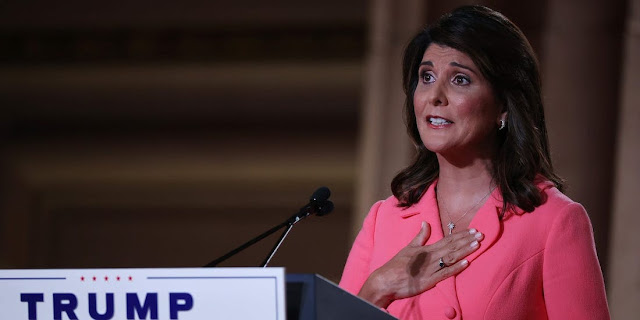 Nikki Haley’s speech tonight at the Republican convention was, in one sense, a speech in favor of Donald Trump’s reelection, but it was obviously also a step in the early auditions for the 2024 nomination. It’s too early to handicap the 2024 contenders; a Trump victory in November would clearly put Mike Pence much more in the driver’s seat. But we saw a good illustration of why Haley could be a formidable contender, as well as a message of the sort that Republicans could use more of. Haley is not a fire-and-brimstone speaker, but she is smooth, polished, and projects the serene unflappability that has seen her through the storms of South Carolina politics and the intrigues of Turtle Bay and the Trump administration. The structure of her speech could easily be converted into a Haley stump speech for herself.

There are basically four theories of where Republicans go after Trump. One is that the party should seek someone who tries to re-create Trump in both style and substance. The second is that the party will need someone who repackages Trumpian populism behind a less rough-edged candidate. The third is that the party should return to a more conventional conservative Republican, while accommodating the shifts in tone and platform that have occurred under Trump. The fourth is that the party needs someone totally untainted by connection to Trump — thus ruling out anyone who served in his administration or speaks at this convention. Again, the 2020 outcome will shape much of the thinking on these choices, but the second and third options are by far the most realistic paths forward. Haley will be gunning for that third lane.

Her opening directly evoked Jeanne Kirkpatrick’s 1984 convention speech, which probably seemed like “playing the oldies” a bit for younger viewers, but she pivoted to a defense of Trump foreign policy on North Korea, Iran, China, and Israel that elided the distinctions between Trumpian nationalism and a more assertive Reaganesque role. Haley clearly stands more with the latter faction in the party’s foreign policy thinking, but she knows the importance of avoiding daylight, at least for now, between herself and Trump, much in the way that Ronald Reagan sanded down discussion of his differences with Richard Nixon after 1976 while defining his own path.

One important way in which Haley is unlike a lot of the speakers at this convention, and more like a traditional Republican, is in having a governing record and talking about it. That required her, and qualified her, to talk about her state’s economic progress against the tide of Obama-era policy — a bit of a tight needle to thread. Her speech, like many others tonight, also emphasized in backhanded fashion how Republicans have moved on from Obama, in saying that Biden’s bosses now will be worse than Obama: Pelosi, Sanders, and “the Squad” (I wonder how many viewers of this convention know them by that title).

Where Haley spoke with more unique authority was in talking about race, insisting that “America is not a racist country” — not meaning an absence of discrimination or hatred, both of which she acknowledged, but that Americans can be, and are, more than that. Her two examples are her own background and rise to the South Carolina governorship as the daughter of Sikh immigrants (“My father wore a turban, my mother wore a sari”) and how the state came together under her leadership after the Charleston church shooting, rather than descending into riots and looting. My guess is that Haley, in citing the taking down of the Confederate flag at the statehouse, will be the only speaker at this convention to directly call out that flag as “a divisive symbol.” Her plea to respect all black lives — even black cops, even black business owners, and even black children victimized by crime — makes a point that receives a lot of sneering on the left, but it is no less valid or needful of being said.

The easy thing for Haley tonight was limiting her remarks to the parts of Trump and his agenda that she can speak about with agreement and endorsement. Which is what you expect at a convention. The harder part, if she is ever to make the leap from one of the party’s stars to its leader, will come later.
Opinion