A few thoughts on Bannon's indictment 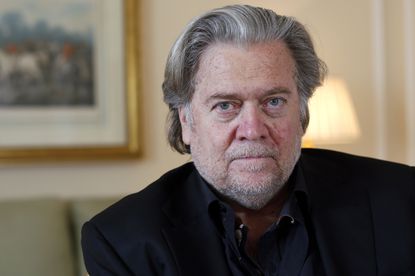 Stephen Bannon, President Trump’s former top White House adviser and 2016 campaign chief, was arrested and charged on Thursday for his role in an alleged fundraising fraud.

Bannon is accused of helping to funnel money from a charity that was soliciting donations for a privately-built border wall. According to court filings, he allegedly used hundreds of thousands of dollars for personal expenses and to secretly pay the co-founder of the organization We Built The Wall.

The charges mark a stunning reversal of fortune for the man who once orchestrated Trump’s improbable election, making him the latest in a series of the president’s allies who have faced criminal charges over the past three years.

Criminal charges are casting a shadow over Team Trump

Bannon is the second former White House official and sixth member of the president’s inner circle to face criminal charges, casting a shadow over Trump’s administration and his 2016 campaign.

Bannon has been credited with ushering that campaign to a general election victory after taking over as its CEO in August 2016. Paul Manafort, who served as the campaign’s chairman, is serving more than seven years in prison on various fraud charges.

Manafort’s deputy on the campaign, Richard Gates, entered a plea agreement with special counsel Robert Mueller to cooperate with the investigation into Russian meddling in the 2016 election. Last year, Gates was sentenced to 45 days in jail and three years of probation for his role in Manafort’s fraud schemes.

Roger Stone, the longtime Republican operative and former Trump campaign adviser, was convicted on charges of lying to Congress and witness tampering that stemmed from his efforts to serve as a link between the 2016 campaign and WikiLeaks. Trump commuted his sentence last month just days before Stone was scheduled to begin serving his three years and four months in prison.

Trump has also toyed with the idea of granting a reprieve to Michael Flynn, the former national security adviser who pleaded guilty to lying to the FBI in 2017. Flynn has disavowed his earlier guilty plea and the Department of Justice is seeking to dismiss the charges against him in a sudden reversal.

Trump’s former personal attorney Michael Cohen is serving a three-year prison sentence for a scheme to pay hush money in 2016 to two women who claimed to have had affairs with Trump.

While there’s been nothing to suggest that the alleged scheme at the center of the Bannon indictment is connected to the president, the arrest of another one of Trump’s former top advisers casts the White House in an uncomfortable light.

The case comes amid building tensions between Trump, NY prosecutors

The charges against Bannon came just weeks after Trump forced Geoffrey Berman, then the U.S. attorney for the Southern District of New York, out of his office in a high-profile spat that exposed the tensions between the administration and the Manhattan federal prosecutor’s office.

When Attorney General William Barr suddenly announced in June that he would be replaced, Berman initially refused to resign, escalating a brief standoff and raising questions about whether the Department of Justice had clashed with Berman over a politically-sensitive investigation.

Berman ultimately agreed to step down when his deputy Audrey Strauss was named as his acting replacement.

The indictment on Thursday raises questions about whether the probe into Bannon and We Build The Wall played any role in the June clash over Berman’s job.

The complaint filed in federal court hinted that the U.S. attorney’s office may have been investigating the alleged scheme as early as October 2019.

The Department of Justice has not responded when asked for comment.

The indictment was announced shortly before a federal judge in New York threw out Trump’s renewed legal challenge to a grand jury subpoena for eight years of his tax returns and other financial records.

The Manhattan district attorney’s office is seeking the documents as part of a potentially wide-ranging criminal investigation into Trump’s business practices, citing news articles that detail potentially fraudulent schemes throughout his career before entering the White House.

The judge’s decision dismissed the argument from Trump’s lawyers that the subpoena is overly broad and intended to illegally harass the president. That argument was a last resort for Trump’s legal team, who suffered a defeat at the Supreme Court this summer with a 7-2 decision that ruled the president did not have absolute immunity from criminal grand jury investigations.

Although the president is appealing the decision issued on Thursday, it marks the latest setback in his effort to keep his business records out of the hands of prosecutors and the public.

Those latest developments are more than just bad headlines for the president; combined, they further show that prosecutors have Trump and his allies in their crosshairs and that there may be little they can do to evade them.

The two charges Bannon is facing each carry the possibility of up to 20 years in prison, though if he’s convicted he will likely receive a far lighter sentence.

Still, prosecutors now hold significant leverage over the former Trump confidant, which they could try to use to pursue investigations into any number of reported schemes involving the president himself or his allies.

It’s unclear what the U.S. attorney’s office might want, if anything, from Bannon, but under Berman it prosecuted an array of major and minor figures in Trump’s orbit, including Cohen, his former attorney.

Since his legal ordeal that landed him in prison, Cohen has turned on his longtime former boss, saying that he arranged the hush money payments because Trump told him to.

It’s also been reported that Berman had been investigating the business dealings of Trump’s personal attorney Rudy Giuliani, though it’s unclear whether the probe is ongoing or whether Bannon would have any knowledge that would be helpful to prosecutors.

Still, if the president’s former top adviser seeks a plea agreement with prosecutors in order to avoid significant prison time, it could possibly lead to even more legal headaches for Trump and his allies.

Trump responded to the indictments on Thursday by trying to put some distance between himself and the fundraising scheme, which was stocked with his allies and tied to his signature political position of building a wall along the southern border.

“I feel very badly. I haven't been dealing with him for a very long period of time, as most of the people in this room know,” Trump told reporters at the White House on Thursday.

“It was something that I very much felt was inappropriate to be doing,” Trump added of the fundraising campaign.

And last month, Trump said in a tweet that he didn’t agree with the private fundraising approach to building a wall.

“I disagreed with doing this very small (tiny) section of wall, in a tricky area, by a private group which raised money by ads,” Trump wrote at the time. “It was only done to make me look bad, and perhaps it now doesn’t even work. Should have been built like rest of Wall, 500 plus miles.”

Still, the group at the center of the scheme was explicit in its support for the president and his mission, and was driven by some of the president’s most staunch supporters and allies.

In addition to Bannon, We Build The Wall’s board of advisers includes Kris Kobach, an immigration hard-liner who had been considered for a post in the administration; Erik Prince, the brother of Education Secretary Besty DeVos who has strong ties to the administration and the 2016 campaign; and David Clarke, the former Milwaukee County sheriff who helped campaign for Trump and has been one of his most vocal supporters in right-wing media.
Opinion