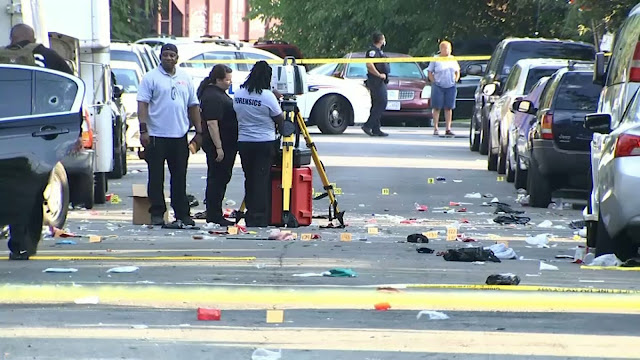 Twenty-one people were shot, including one 17-year-old boy who died, at a social gathering in southeast Washington, D.C., early on Sunday, according to police.

The shooting occurred during a gathering in the 3300 block of DuBois Place, Police Chief Peter Newsham said during a briefing. The shooting injured 20, including an off duty police officer who Newsham said is “struggling for her life” at a local hospital.

The 17-year-old boy who was killed was identified as Christopher Brown. Police did not identify the officer or other victims by name. Newsham said as far as police know, all other injuries are non-life threatening.

One other 17-year-old was shot and the other victims are adults, Newsham said.

Newsham said police are searching for at least three shooters but said there could have been more. He said gunshots were fired simultaneously from different locations. He said the shooting appeared to have been from hand guns.

The police chief said preliminarily officers were on the scene and he is going to look into whether or not officers could have done a better job at breaking up the gathering.

He said there were “certainly way too many people” outside amid the coronavirus pandemic.

“We can’t tolerate these types of gatherings in our city during COVID-19. It’s just too dangerous,” Newsham said. “Nobody can predict that a shooting like this is going to happen at a gathering like this, but we can’t have these large gatherings in the city.”

Newsham said there was no permit issued for the gathering.

Mayor Muriel Bowser (D) said it is important for the community to have “zero tolerance for this activity.”