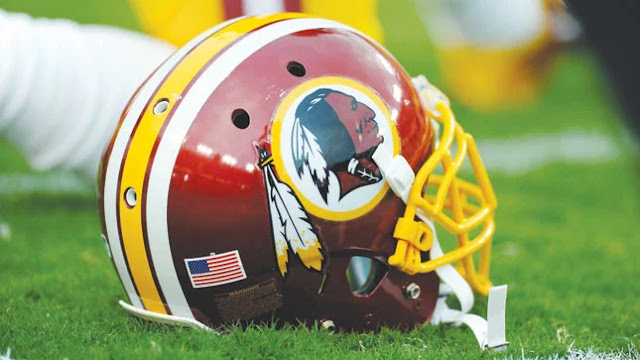 Washington, D.C.'s NFL team on Monday announced it was retiring its controversial "Redskins" name and logo, which have long brought charges of racism.
The team for years refused to consider changing the name, but that changed this summer after corporate sponsors and retailers pressured the team to drop a nickname that had long been seen as a racial slur against Native Americans.
The team announced it was conducing a review of the name on July 3, and was not expected to play under the old name and logo again.
“Today, we are announcing we will be retiring the Redskins name and logo upon completion of this review,’’ the organization said in a statement.
"Dan Synder and Coach Rivera are working closely to develop a new name and design approach that will enhance the standing of our proud, tradition rich franchise and inspire our sponsors, fans and community for the next 100 years."
FedEx, which owns naming rights to the team's Maryland-based stadium, had threatened to pull out of business dealings with the team unless the name was changed.
Eighty-seven investment firms and shareholders also sent letters to top executives at Nike, FedEx and PepsiCo urging the companies to sever ties with the organization unless it changed its name. The 87 firms represent more than $620 billion in assets.
Amazon, Walmart, Nike and other major retailers also pulled the team's merchandise from their respective websites in recent weeks.
The team had been using its name since since 1933, and Snyder previously had refused to considering changing it, insisting it honored Native Americans,.
“We’ll never change the name,” Snyder told USA Today in 2013: “It’s that simple. NEVER — you can use caps.”
Several brands have changed their brands and logos in recent weeks amid nationwide protests following the police killing of George Floyd on May 25, and it is possible other sporting teams could also make changes.
Major League Baseball's Cleveland Indians has said it is considering changing the name it has held since 1901.
Snyder cited "recent events around our country and feedback from our community" while announcing the review of the team's name.
Coach Rivera said earlier this month he began discussions with Snyder regarding a name change in May following a renewed campaign by tribal leaders and activists to retire the "Redskins" name.
“We came up with a couple of names — two of them I really like,” Rivera recently told the Washington Post.
Names reportedly being considered are the Redtails, Warriors and RedWolves.
Sports