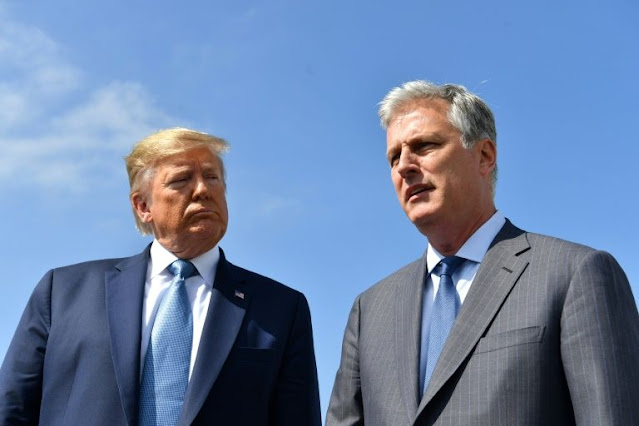 National security adviser Robert O’Brien has tested positive for COVID-19, a White House official confirmed on Monday.
"National Security Adviser Robert O’Brien tested positive for COVID-19. He has mild symptoms and has been self-isolating and working from a secure location off site,” the official said in a statement.
“There is no risk of exposure to the President or the Vice President," the official added. "The work of the National Security Council continues uninterrupted."
The positive test makes O’Brien the highest-ranking White House official to date to test positive for the virus, which has killed more than 145,000 people in the U.S.
He meets regularly with President Trump and, as a result, is tested for the coronavirus daily. It’s unclear how he contracted the virus or what symptoms, if any, he has.
O'Brien traveled earlier this month to Europe to meet with his counterparts from France, Italy, the United Kingdom and Germany.
He is also a member of the White House's coronavirus task force, which meets at least once a week. It was not immediately clear when O'Brien last attended a task force meeting in person.
Bloomberg first reported O’Brien had tested positive.
One of the president’s military valets and the vice president’s press secretary previously tested positive for the virus. Kimberly Guilfoyle, who is a top Trump campaign official and is dating Donald Trump Jr., also tested positive earlier this month.
National