Trump: We’re very much going to put pressure on governors and everyone else to open the schools 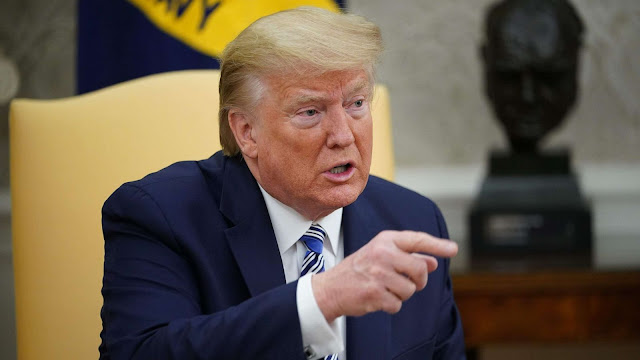 President Trump on Tuesday said the White House would put pressure on governors to get schools opened in the fall amid rising coronavirus cases in the United States.
At a White House summit, Trump signaled the full-court press, saying it would not be good politically to keep schools closed.
“We don’t want people to make political statements or do it for political reasons. They think it’s going to be good for them politically, so they keep the schools closed. No way,” Trump said during a White House event with government officials and school administrators.
“We’re very much going to put pressure on governors and everyone else to open the schools,” Trump added, after again claiming that the increase in cases is a result of increased testing.
A number of states have seen spiking cases, and the U.S. last week saw the daily number of cases across the country cross the threshold of 50,000.
Health experts argue the spiking number of cases is likely linked to people congregating more as lockdowns across the country eased and people were less guarded about social distancing. Some states have since reimposed measures to keep people apart, such as closing bars or delaying the opening of indoor dining at restaurants.
The rising cases have also raised questions about schools opening in the fall.
Trump, Vice President Pence, Health and Human Services (HHS) Secretary Alex Azar, Education Secretary Betsy DeVos, CDC Director Robert Redfield and White House coronavirus response coordinator Deborah Birx attended the day-long event at the White House on Tuesday with school officials from around the country.
The message from the administration was unambiguous even before Trump spoke: schools should have no issues returning to in-person learning in the fall.
Pence relayed that message to governors in a teleconference on Tuesday morning, while DeVos told state leaders that plans that included only limited in-person instruction were unacceptable.
“When it comes to reopening our schools, nobody should hide behind our CDC’s guidance as a way to not reopen schools,” Azar said, echoing Pence’s comments. “Our guidance is to enable and empower the reopening of schools and physical attendance by our kids.”
The CDC guidance emphasizes opening safely and states schools should only dismiss classes for longer than two weeks if there is “substantial” COVID-19 spread in their communities.
Schools that open in areas with “minimal to moderate” transmission should cancel large gatherings, space desks at least six feet apart, stagger arrival and dismissal times and limit nonessential visitors, under the guidelines.
“We need to plan to keep our schools reopened. I think this is really the important message and that’s why we’re having these discussions to get people to understand we need to reopen schools. We can do this safely. We need to commit to it. We need to just get it done,” Redfield said.
Trump has made a concerted push to reopen schools for weeks as he seeks to get much of the country reopened.
The coronavirus crisis and the lockdowns that resulted crushed the national economy, hurting Trump's chances for reelection..
Experts have noted that the economic recovery is in many ways tied to school reopenings as parents have been forced to balance work with childcare and homeschooling. Opening schools would allow people to go to work and could benefit the economy.
The CDC is working on additional guidance to help schools determine when and how to reopen in an orderly manner. Schools across the country dismissed students in the early days of the pandemic amid questions about what role children play in spreading the virus.
While there is still no definitive answer to that question, educators and experts sounded the alarm on the unexpected consequences of closures on students, including child hunger.
“CDC did not recommend the schools be closed,” Redfield said.
“Obviously the civil leaders made that decision. I’m not critical of it but I’m just saying from a public health point of view we didn’t see that schools needed to be closed, generally.”
The American Academy of Pediatrics (AAP) is also strongly pushing for schools to reopen in the fall, noting the “negative impacts” the spring closures had on students.
Safely reopening schools relies strongly on administrators implementing and students complying with social distancing protocols, wearing face coverings and washing their hands regularly.
But Redfield acknowledged the government has had difficulty convincing younger people of the importance of those steps.
“I don’t think the younger group fully understands how important it is for them to fully participate in the social distancing,” he said.
Trump administration officials have made clear that they view the decision to reopen schools as a state and local decision and on Tuesday sidestepped questions about whether they were consulted on or agreed with the recent decision by Florida’s education commissioner to require that public schools in the state reopen in August.
However, under the CDC guidance, schools in communities with substantial community transmission, like some areas in Florida, should consider extended dismissals, though it notes decisions will come from state and local health officials.
There are also residual risks to account for. Older teachers and administrators may not be able to return to schools due to higher risks if they contract the virus, and there are concerns about asymptomatic children bringing the virus home and exposing older relatives. A small percentage of children who have contracted coronavirus have developed severe symptoms akin to Kawasaki disease.
But administration officials have been insistent that restrictions can’t be “all or nothing” and that the country must learn to live with the virus to some extent.
“We've noted the fact that with everything in life there is some level of risk,” DeVos said. “And it’s a matter of assessing those risks and taking all the different factors into account. So not only physical health and safety but also social-emotional health and mental health.”
National