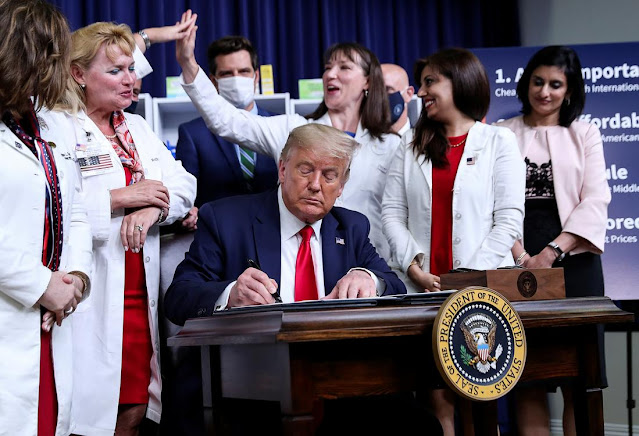 President Trump on Friday signed four executive orders aimed at lowering drug prices, seeking to take action on a key issue for voters in an election year.
The orders signed by Trump would move towards allowing states to develop plans to import cheaper drugs from Canada, eliminate a system of drug discounts known as rebates in a bid to simplify the system, and seek to make EpiPens and insulin more affordable for some patients of certain health providers.
Trump also announced a fourth, more sweeping order, seeking to slash the price that Medicare pays for drugs to be in line with prices paid in other countries, what Trump called "most favored nation" status for the U.S.
But in a surprise move, Trump said that order's implementation would be delayed until Aug. 25 to give pharmaceutical executives, who strongly oppose the idea, a chance to propose an alternative.
Trump said he would be meeting with drug company executives at the White House on Tuesday, offering a concession that the order will not be implemented right away.
Trump said at an event at the White House on Friday that the orders "will lead to massive reduction in drug costs."
"This is just a big day," Trump said. "I've been waiting for this day for a long time."
But on all of the orders, it is unclear when any will actually go into effect or show up in consumers' wallets. Trump already took steps towards allowing importation of drugs from Canada last year, for example, but there are a number of steps in the regulatory process.
The White House did not immediately release the text of the orders to show their details.
The pharmaceutical industry had rallied to try to stop the "most favored nation" order, and Trump said he agreed to their request for a meeting and to delay the order until after that meeting.
"If these talks are successful we may not need to implement the 4th executive order," Trump said.
Democrats dismissed the actions as election-year posturing that will not actually take effect and reduce drug costs.
“President Trump’s Executive Orders are a desperate and ineffective election year stunt to try to convince people he’s following through on his promise to lower prescription drug prices," said House Energy and Commerce Committee Chairman Frank Pallone Jr. (D-N.J.).
He noted the Trump administration opposes the sweeping bill to lower drug prices passed by House Democrats in December, which would allow the secretary of Health and Human Services to negotiate lower prices.
National